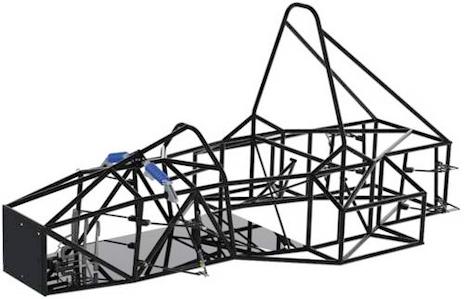 Spaceframes are sometimes used in the chassis designs of automobiles and motorcycles. In both a spaceframe and a tube-frame chassis, the suspension, engine, and body panels are attached to a skeletal frame of tubes, and the body panels have little or no structural function. By contrast, in a unibody or monocoque design, the body serves as part of the structure.

Tube-frame chassis pre-date spaceframe chassis and are a development of the earlier ladder chassis. The advantage of using tubes rather than the previous open channel sections is that they resist torsional forces better. Some tube chassis were little more than a ladder chassis made with two large diameter tubes, or even a single tube as a backbone chassis. Although many tubular chassis developed additional tubes and were even described as "spaceframes", their design was rarely correctly stressed as a spaceframe and they behaved mechanically as a tube ladder chassis, with additional brackets to support the attached components, suspension, engine etc. The distinction of the true spaceframe is that all the forces in each strut are either tensile or compression, never bending. Although these additional tubes did carry some extra load, they were rarely diagonalised into a rigid spaceframe.

The first true spaceframe chassis were produced in the 1930s by designers such as Buckminster Fuller and William Stout (the Dymaxion and the Stout Scarab) who understood the theory of the true spaceframe from either architecture or aircraft design.

The first racing car to attempt a spaceframe was the Cisitalia D46 of 1946.This used two small diameter tubes along each side, but they were spaced apart by vertical smaller tubes, and so were not diagonalised in any plane. A year later, Porsche designed their Type 360 for Cisitalia. As this included diagonal tubes, it can be considered the first true spaceframe.

The Maserati Tipo 61 of 1959 (Birdcage) is often thought of as the first but in 1949 Dr. Robert Eberan-Eberhorst designed the Jowett Jupiter exhibited at the London Motor Show in 1949 and taking a class win at the 1950 Le Mans 24hr. Later the small British car manufacturers developed the concept TVR produced an alloy-bodied two seater on a multi tubular chassis, which appeared in 1949.

Colin Chapman of Lotus introduced his first 'production' car, the Mark VI, in 1952. This was influenced by the Jaguar C-Type chassis, another with four tubes of two different diameters, separated by narrower tubes. Chapman reduced the main tube diameter for the lighter Lotus, but did not reduce the minor tubes any further, possibly because he considered that this would appear flimsy to buyers. Although widely described as a spaceframe, Lotus did not build a true spaceframe chassis until the Mark VIII, with the influence of other designers, with experience from the aircraft industry.

A drawback of the spaceframe chassis is that it encloses much of the working volume of the car and can make access for both the driver and to the engine difficult. Some spaceframes have been designed with removable sections, joined by bolted pin joints. Such a structure had already been used around the engine of the Lotus Mark III. Although somewhat inconvenient, an advantage of the spaceframe is that the same lack of bending forces in the tubes that allow it to be modelled as a pin-jointed structure also means that such a removable section need not reduce the strength of the assembled frame. 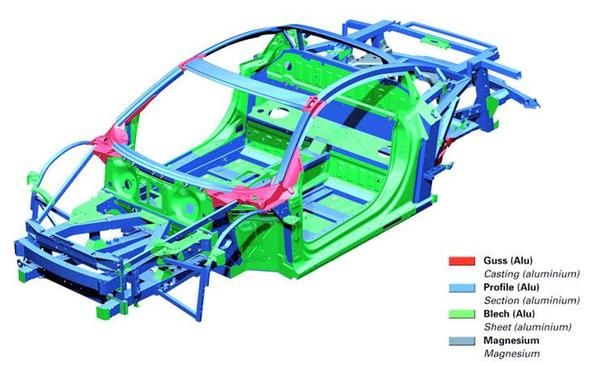