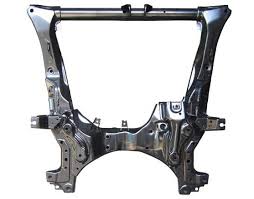 A subframe is a structural component of a vehicle, such as an automobile or an aircraft, that uses a discrete, separate structure within a larger body-on-frame or unit body to carry certain components, such as the engine, drivetrain, or suspension. The subframe is bolted and/or welded to the vehicle. When bolted, it is sometimes equipped with rubber bushings or springs to dampen vibration.

The principal purposes of using a subframe are, to spread high chassis loads over a wide area of relatively thin sheet metal of a monocoque body shell, and to isolate vibration and harshness from the rest of the body. For example, in an automobile with its powertrain contained in a subframe, forces generated by the engine and transmission can be damped enough that they will not disturb passengers. As a natural development from a car with a full chassis, separate front and rear subframes are used in modern vehicles to reduce the overall weight and cost. In addition a subframe yields benefits to production in that subassemblies can be made which can be introduced to the main bodyshell when required on an automated line.

There are generally three basic forms of the subframe.

A subframe is usually made of pressed steel panels that are much thicker than bodyshell panels, which are welded or spot welded together. The use of Hydroformed tubes may also be used.

Subframe are also prone to misalignment.espcially at the spot were it is bolted to the chassis.which can cause vibration,alignment issues on the suspension and steering components.misalignment is cause by the mounting bolts inherent space between the bolt and the mounting hole.which overtime tends to move