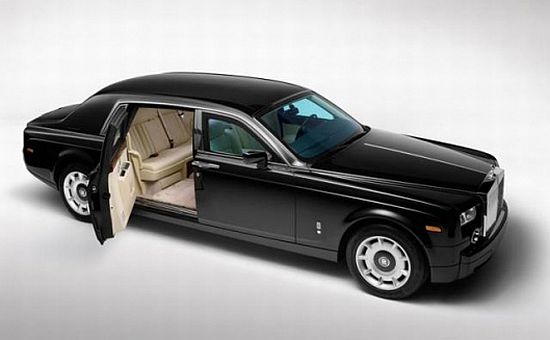 A suicide door is a car door hinged on the edge closer to the rear of the vehicle, also known as the trailing edge.Such doors were originally used on horse-drawn carriages,but they are rarely used on modern vehicles, due primarily to safety concerns. Although the term is common in the custom car trade, it is avoided by major automobile manufacturers in favour of terms such as "coach doors" (Rolls-Royce), "FlexDoors" (Opel)"freestyle doors" (Mazda), "rear access doors" (Saturn),and "rear-hinged doors"

Suicide doors were common on cars manufactured in the first half of the 20th century. In the era before seat belts, the accidental opening of such doors meant that there was a greater risk of falling out of the vehicle compared to front-hinged doors, where airflow pushed the doors closed rather than opening them further. Suicide doors were especially popular in the gangster era of the 1930s, supposedly due to the ease of pushing passengers out of moving vehicles with the feature, according to Dave Brownell, the former editor of Hemmings Motor News.

Since the four-door Lincoln convertible did not have a center B-pillar, the rear door glass was designed to electrically retract a few inches when the rear doors were opened in order for the weatherstripping to clear the front door glass; consequently, passengers in the back seat had to crawl through to the front seat to exit if the car's battery was dead. This problem was not universal, however. The Fiat 600 Multipla, introduced in 1956, and the SEAT 800, introduced in 1963, were both four-door cars featuring front suicide doors and rear conventional doors, with all four doors connected to the B-pillars.

For a time, the last mass-produced car model with independently opening suicide doors was the Ford Thunderbird four-door sedan from 1967 to 1971. The 1971 model was the last American production automobile to feature rear suicide doors; safety concerns prevented the subsequent use of such doors.More recently, rear suicide doors that cannot be opened until the regular front doors are opened have been appearing on a number of vehicles, including extended-cab pickup trucks, the Saturn SC, the Saturn Ion QuadCoupe, the Honda Element, the Toyota FJ Cruiser, and the Mazda RX-8. In 2003, the new Rolls-Royce Phantom reintroduced independent suicide doors. Other models with classic suicide doors include the Spyker D8 and the Rolls-Royce Phantom Drophead Coupe four-seat convertible.

Rear passenger suicide doors had long been used on Austin FX4 hackney carriages. However, these models are being replaced by TX1s, which lack suicide doors.

Rear-hinged doors make entering and exiting the vehicle much easier. They allow a passenger to enter in a natural way, by walking forward toward the vehicle and turning to sit, and to exit by stepping forward out of the vehicle. In combination with traditional front doors, they also make exiting easier for the driver, who can then reach the handle of the back door to open it for a passenger. In Austin FX4 taxis, drivers were able to reach the rear door handle through the driver's window without getting out of the vehicle.

Suicide doors can create several unique hazards not applicable to conventional doors. If a passenger exits through a suicide door on a moving vehicle, the door will hit him or her.Additionally, suicide doors can pose danger for passengers exiting towards the street; if a passing car hits the open door, the door can fling closed, injuring the exiting passenger. Despite the use of safety latches or locks, aerodynamic factors can still lead to suicide doors being opened during driving. In 1969, Consumer Reports reported this problem on a Subaru 360.