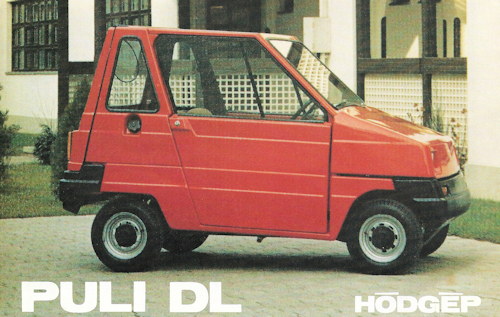 In the mid-1980s, the import-export company "Techno Impex", which made deals between countries like Hungary and the West, turned to HÓDGÉP with the proposal to build a small city car. The leaders at HÓDGÉP gladly took up the proposal, because the Hungarian economy was suffering from currency shortage at that time, and they saw it as a chance to open up new markets for themselves.  After the oil crisis in the late 1970s were microcars in high demand, especially in countries like France and Italy.

So, in 1986 the first designs for the new small car were made. It was first called "Hungi" and "Pouli"; later it became "Puli". In 1987 the first mobile prototypes were available.

The Puli is 2460 mm long and was assembled from parts of Skoda, Lada and Polski Fiat, which were then available in the country. The car is powered by a diesel engine that delivers 6.4 hp (4.0 kW). In the spring of 1988, when the decisive ramp-up of series production took place, an attempt was made to eliminate systematically existing quality problems. Was in the first prototype still a Yanmar diesel engine installed with 273 cubic centimetres, so this was later replaced by a diesel from Lombardini . The body is made of fiberglass reinforced plastic, mainly was intended for export to France, where this category of automobiles is license-free.

At the beginning of 1991, an electric car model was created under the name Fridez Pinguin 4. It came about through the acquisition of early Puli stocks with subsequent conversion to electric cars. The limited small series production of the Penguin 4 is due to the business activity of the Swiss solar and electric car builder Bruno Fridez. However, this project did not last long because the manufactured products did not meet the quality expectations of that time.

At that time, economic change in Hungary HÓDGÉP was privatized. As part of this privatization was established in early 1991, the Puli Jármű és Gépgyártó Kft (Puli vehicle and engine manufacturing Ltd.) was founded, whose Managing Director Alexander Pikali was. Since Pikali was dissatisfied with the business situation, as far as the Puli was concerned, he decided to break with Hardy and Fridez and go their own way. The manufactured by the newly established company puli 2 E . A complete overhaul of the entire powertrain. It is a construction, in which a 7.4 kW electric motor (more precisely: a direct current machine in series connection) with downstream reduction gearbox with differential and 10 lead-acid batteries of 6 volts were installed. The resulting Puli reaches a range of 30-100 km and a maximum speed of 60-70 km / h. On the chassis, the body styles "convertible", "hatchback" and "Transporter".

Borrowings on the debit side weighed heavily on the company in relation to the generated revenues, when lenders realized in 1992 that things were not going so smoothly, they sought bankruptcy protection. But at the end of 1996, lenders liquidation eventually prevails.

In 2006, the Puli came back under the new owner Henrik Harasta . Harasta owns the trademarks Puli and Wartburg.