The first presentation took place on October 21, 1968, a few days before the Tokyo Motor Show. Despite light alloy and front engine This wanted to prove that the air cooling is superior to the water cooling without loss of comfort, because it gets by with less parts and less weight. The Honda 1300 was undoubtedly a culmination of the technical development of production automobiles with air-cooled engines. 203 patents have been applied for this model.

Despite a quiet engine - thanks to DDAC ( D uo D yna A ir C ooling) - and good driving performance, the model of economic success was denied. Therefore the production ran out after 106.491 manufactured units (sedan and coupe). The successor called 145 still had the body of the 1300 , but a water-cooled engine.

In 1969, the 1300 Van prototype was presented, a station wagon but did not go into production. The successor model of the series was offered from 1976 Honda Accord .

The sedan was sold from May 1969 in Japan, the coupe from March 1970. The car was available in 1969 in four trim levels (Standard / Deluxe / Custom / S) and two power levels (100 hp / 115 hp). It was built in two variants and other performance levels until 1972. Main external distinguishing feature of the two variants are the headlights. The first variant had rectangular headlights, the later round headlights. Since 1970 there was the vehicle with automatic transmission. Later that same year, the sedan was revised and set the more powerful variant.

As with the sedan, there were also two variants of the coupe , which differ externally but only slightly. The difference is mainly in the performance: the 1.3-liter air-cooled engine with DDAC features a carburetor in the Coupé 7 , while the stronger Coupé 9 uses four carburettors. Automatic versions were also offered.

Already in 1971, the coupe was revised. The successor of the Coupe 7 received in the course of the changes the front of the also revised saloon. 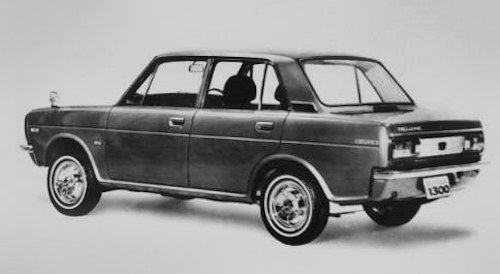