The Hillman Hunter is a vehicle of the British Rootes Group , which was produced from 1966 to 1976 as a sedan and station wagon . The Hunter was the Hillman version of the Roots Arrow and replaced the Hillman Super Minx . The Hunter had initially from 1967 to 1970 as a twin brother, which bore the name Hillman Minx and was slightly simpler equipped and weaker motorized.

The Hillman Hunter Mark I / II took over the engine of its predecessor, a 4-cylinder in-line engine with 1725 cc displacement, which developed in the Hunter but 74 bhp (54 kW ). This allows the vehicle to reach a top speed of 144 km / h. The Hunter also received a completely new, smooth body . In addition to the sedan also a 5-door station wagon was offered. In 1975, this model expired.

From 1971 a version called Hillman Hunter de Luxe appeared. She had a slightly better equipment and replaced the Hillman Minx.

From 1977, the Hunter was sold under the name Chrysler Hunter . The production was continued until 1979; then the company's new owner, the French PSA group, ceased production. In Iran , however, he was (with a different engine) until 2005 as Paykan 1600 of Iran Khodro Co. further developed. The own creation Paykan Pickup is still produced in the city of Tabriz in Iran. 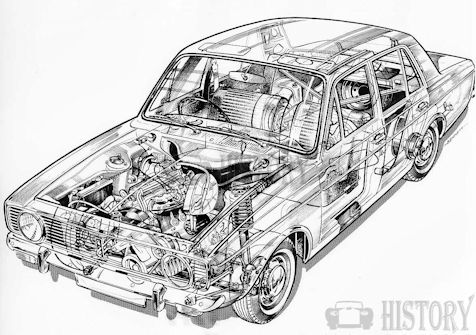