Vehicle manufacturer Remscheid Germany from 1910 to 1929 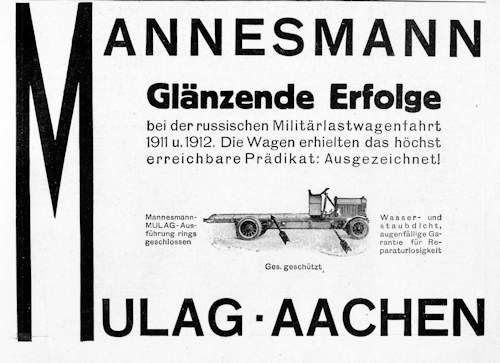 The Mannesmann automotive KG was founded in 1919 by brothers Alfred and Carl  also Reinhard Mannesmann  in Remscheid as Mannesmann Motor Werke GmbH . They had been operating the automobile company Mannesmann-MULAG in Aachen since 1910, although the company had specialized primarily in the development of trucks and buses.

They produced passenger cars of the upper luxury class and for racing purposes.Parallel to this, Carl Mannesmann and his brother.

The Mannesmann Motor Werke GmbH emerged from the Mannesmann light Werke AG , which before the First World War produced with about 4,000 employees gas and Hängeglühlichter and served with about 2,000 employees as arms and munitions factory during the war under Carl Mannesmann as director. After the war, the production of freezers and motorized plows began, but soon after the repair of war damaged trucks and their conversion for civilian use. Soon after, the brothers also dealt with the development of automobiles and traded from 1919 as Mannesmann Motorenwerke GmbH . In 1923, the Remscheider factory finally became Mannesmann Automobil-Werk KGrenamed and produced four-cylinder passenger cars of the lower middle class . By 1928, around 2000 vehicles were built here.

The reliability of the vehicles could be proven with damage-free Alpine crossings on hot days. In addition, converted vehicles also took part in the Eifel Race at Nideggen, where they won the German Tourist Trophy in 1925, 1926 and 1927 .

From 1928, they relocated to the production of eight-cylinder luxury vehicles. After just one year and about 200 copies, the company was insolvent in August 1929. The last model, the Type 8 Mb Model 100, had a Rickenbacker engine supplied by DKW .

In 1930, a few vehicles from existing individual parts were created in a rescue company.