Automotive manufacturer Regensburg Germany from 1953 to 1964 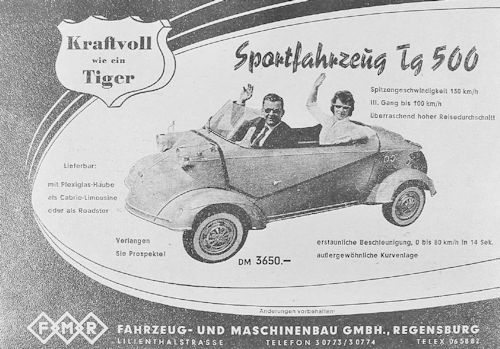 The company Automotive and Mechanical Engineering Regensburg (FMR) was a vehicle manufacturer based in Regensburg .

FMR was from 1957 successor to the Regensburg steel and engineering , the manufacturer of the Messerschmitt cab KR 175 and from 1955 his successor, the KR 200 .

FMR continued to produce the KR 200 and developed the Tg 500 , called Tiger. The production of the Tg 500 in 1961 ,while the KR 200 was built until 1964.After then demand was so to low for production. Similarly, a motorized load tricycle "Mokuli" was produced.