Automotive manufacturer Berlin Germany From 1923 to 1924. 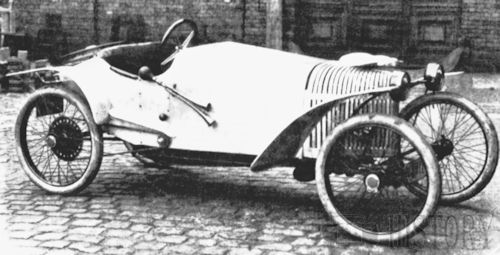 FMC Zimmermann  was a Automotive manufacturer  with a German car brand. of Bee.

The only model was a light car Cyclecar that was built in Berlin for only one year in 1923/24 by the manufacturer FMC Zimmermann .

The constructors of the bee were the teacher Kraemer and a certain Melms. Basis for this vehicle was a frame of a Ford-T , which was rebuilt accordingly. An air - cooled two - cylinder BMW Boxer engine of the type M2B 15 with 6.5 hp served as a drive. This was installed at the front and transferred the power to a friction gear . From there, the right rear wheel was driven by a chain. The axles were hung on quarter elliptical springs, the wire spoke wheels were fitted with 28 × 3 inch tires. The body was made of aluminum sheet. On the multi-slotted hood was a big bee attached as a trademark.

Car and motorcycle journalist Baron von Lengerke participated in the test drives. After a ride he said: "he hums like a bee", hence the name bee for the vehicle. How many bees were built is not known. One source says it was two vehicles.

The construction of the first car took place in the bedroom of the teacher Kraemer.