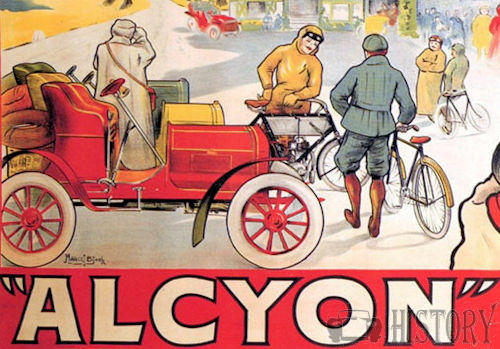 The Alcyon was a French bicycle, automobile and motorcycle manufacturer between 1903 and 1954.

Alcyon originated from about 1890 when Edmond Gentil started the manufacture of bicycles in Neuilly, Seine. In 1902, this was complemented by motorcycle production and in 1906, the first cars were shown at the fair "Mondial de l'Automobile" in Paris, France. Also in 1906 it founded the professional Alcyon cycling team which was active until 1955, including winning the Tour de France 6 times.

Voiturettes before the World War I

They entered the car market with a brace of conventional voiturettes in 1906,These had thermo-syphon cooling, low-tension magneto ignition, shaft drive and 3-speed gearboxes;in addition to the inevitable 950cc single there was a small 1.4-litre 4-cylinder selling at £235.A wider range was available in 1907, the 725cc and 1-litre single-cylinder cars having coil ignition,while a high-tension magneto was standard on the 2, 7-litre L-head 4-cylinder model, In 1909 a 1 59-litre car with Zürcher engine was sold.
As late as 1910 singles and twins were catalogued, but the smaller touring Alcyons of the immediate pre-1914 era had T-head engines; the biggest model, of 2.6-litres
capacity, had a single camshaft.

Two models were shown in 1906, one a two seat light car with single-cylinder 950 cc engine and a larger four seat model with 1.4-litre four-cylinder engine. Both engines were bought in from Gentil. The cars were advanced models with 3-speed gearboxes and shaft drive. However, the single-cylinder models were dropped in 1912 and larger models of up to 2120 cc were added to the range. By then, most of the engines were obtained from Zurcher.

After 1918 motorcycles once again predominated, though an obscure 2-litre was made.

The company moved to Courbevoie, Seine in 1912.

In 1914, the company's name was changed to Automobiles Alcyon. After the war, the first model was a 1914 cc four-cylinder model, some examples of which were tuned and sold by the Lyons agent as Alycon-GLs and performed quite well in competition. However, the car was not a success and did not sell well, so in 1923, Alcyon moved into the production of cyclecars, using 500 cc two-stroke flat-twin engines in a design bought from SIMA-Violet. Later the company manufactured another cyclecar of similar design, thought this one featured a single-cylinder engine. This proved a complete flop, and the company failed in 1928. Alcyon never sold cars again. 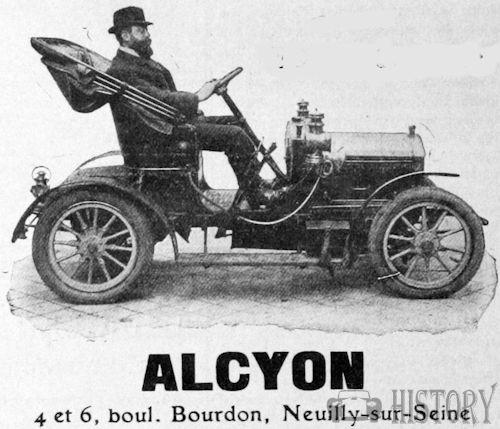