The 1969 model year restyle "added more heft to the body" with body length extended by 3.8 inches (97 mm) (the wheelbase remaining at 108 inches), width increased by almost half an inch, and the Mustang's "weight went up markedly too."1969 was the first model to use quad headlamps placed both inside and outside the grille opening. The corralled grille pony was replaced with the pony and tribars logo, set off-center to the drivers side. The car was longer than previous models and sported convex rather than concave side panels. The fastback body version was renamed Sportsroof.

1969 saw the introduction of the Mach 1, with a variety of powerplants options and many new styling and performance features. Distinctive reflective striping was placed along the body sides, with a pop-open gas cap, dual exhausts, matte-black hood with simulated air scoop and NASCAR-style cable and pin tiedowns. It used steel wheels with bold-lettered Goodyear Polyglas tires. A functional "shaker" hood scoop - which visibly vibrated by being attached directly to the air cleaner through a hole in the hood - was available, as were tail-mounted wing and chin spoilers and rear window louvered blackout shade. The Mach 1 featured a deluxe interior with simulated wood trim, high backed seats, extra sound deadening, remote sports mirrors and other comforts. The Mach 1 proved popular with buyers with 72,458 cars sold in 1969.

The Boss 302 was created to meet Trans Am rules and featured distinctive hockey-stick stripes, while the understated Boss 429 was created to homologate the Boss 429 engine (based on the new Ford 385 series engine) for NASCAR use. The two Boss models received fame on the track and street and to this day they still demand premium pricing for their pedigree. 1628 Boss 302's and 859 Boss 429's were sold in 1968- making these vehicles very rare.

A new "luxury" model became available starting in 1969, available in only the hardtop body style. The 'Grande' featured a soft ride, 55 pounds (24.9 kg) of extra sound deadening, as well as deluxe interior with simulated wood trim. It was popular with buyers with 22182 units sold in 1969.

Amidst other special editions, the 1969 Mustang E was offered for those desiring high mpg. The 1969 Limited Edition Mustang E was a rare (about 50 produced) fastback special model designed for economy. It came with a six-cylinder engine (250 cu in (4.1 L)), a high stall torque converter for the standard automatic transmission and a very low, 2.33:1 rear axle ratio. Mustang E lettering on the rear quarters identified the special Mustang E. Air conditioning was not available on the 'E' model.

The Mustang GT was discontinued in 1969 due to poor sales versus the success of the new Mach 1 with only 5396 GT models sold that year.

The 428 cu in (7.0 L) Cobra Jet engine continued unchanged in the 1969 and 1970 model years and continued to be advertised at just 335 hp (250 kW; 340 PS) despite being closer to 410 hp (306 kW; 416 PS). However, whenever a V or W axle was ordered (3.90 or 4.30 locking ratio) on any Cobra Jet Mustang, this kicked in various engine improvements which were designed to make the engine more reliable on the strip. These improvements included an engine oil cooler (which resulted in AC not remaining an option), stronger crankshaft and conrods and improved engine balancing and was named the 'Super Cobra Jet'. On the order form, these improvements were later referred to as 'Drag Pack'. Today, these models request a premium price despite offering no notable performance increase other than provided by their unique axle ratios.

The 1969 Shelby Mustang was now under Ford's control and made to look vasty different than regular production Mustangs, despite now being built inhouse by Ford. The custom styling included a fiberglass front end with a combination loop bumper/grille that increased the car's overall length by 3 inches (76 mm), as well as five air intakes on the hood. Two models were available, GT-350 (with a 351 cu in (5.8 L) Windsor (351W) producing 290 hp (216 kW; 294 PS)) and GT-500 (with the 428 cu in (7.0 L) Cobra Jet engine), in both sportsroof or convertible versions. All 1969–1970 Shelby Mustangs were produced in 1969. Because of dwindling sales, the 789 remaining 1969 cars were given new serial numbers and titled as 1970 models. They had modified front air dam and a blackout paint treatment around the hood scoops.

The 1970 model year Mustangs were restyled to be less aggressive and therefore returned to single headlamps which were moved to the inside of the grille opening with 'fins' on the outside of the grille sides. Some felt the aggresive styling of the 1969 model hurt its sales and this view prompted the headlamp revisions and simplification of other exterior styling aspects. It's worth noting though that 1969 sales exceeded those in 1970. The rear fender air scoops were removed and the taillight panel was now flat instead of concave as seen in 1969. The interior options remained mostly unchanged.

Ford made 96 'Mustang Twister Special' cars for Kansas Ford dealers in 1970. The Twister Specials were Grabber Orange Mach 1s with special decals. Ford also made a few 'Sidewinders', which were built in Dearborn, shipped to Omaha, and sold in Iowa and Nebraska. They were available in Grabber Green, Grabber Blue, Calypso Corral, and Yellow. The stripes came in the trunk to be installed by dealers.

The 1971 Mustang - introduced in September 1970 - were designed under the supervision of Ford's new product design manager, Semon "Bunkie" Knudsen, originally of General Motors. Again, the revised model grew in size, gaining 3 inches in width in order to accommodate Ford's big block 429 cu in (7.0 L) V8 without need for an extensive suspension redesign.

As before there were three body styles: Hardtop, Sportsroof, and Convertible.

Hardtop models were also available with luxury 'Grande' trim, which added Grande badges on the C-pillars and a vinyl roof. An additional edition of the hardtop, the Spring Special, was available between March and May 1971, which added Mach 1 styling cues to the hardtop. Sportsroof models were available in base configurations in addition to the Mach 1 and Boss 351 sport/performance options.

The Mach 1s were available with two-tone paint schemes, optional hockey-stick stripes, NACA (NASA) hood scoops (functional on examples ordered with Ram Air), color keyed side mirrors, and additional sports/performance options. All Mach 1 models came stock with urethane front bumpers and an alternate grille equipped with amber sportlights. Though the Mach 1 is often associated with the NACA hood (a no-cost option) and other styling cues, base Mach 1s could be had with the standard hood and the 302 2V engine.

Boss 351 examples were similar in appearance to the Mach 1, and included complete black-out hoods, in addition to front and rear spoilers.

Convertibles were equipped with a power top and a glass rear window. These were the last Mustangs available as a convertible until 1982. 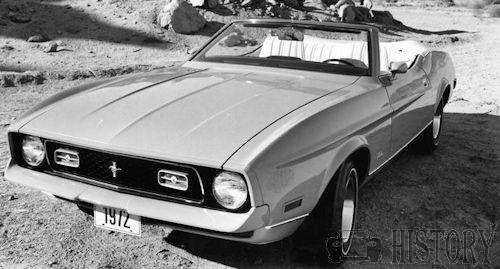 There were no significant changes in appearance for the 1972 model year, though a commemorative Olympic Sprint Edition (also available on the Pinto and Maverick) was released between March and June of this year. Sprint editions were available in Hardtop and Sportsroof variants, and featured white paint schemes with light blue accents and USA shield decals on the rear quarter panels. An additional 50 Sprint convertibles were produced exclusively for the 1972 National Cherry Blossom Parade in Washington D.C. 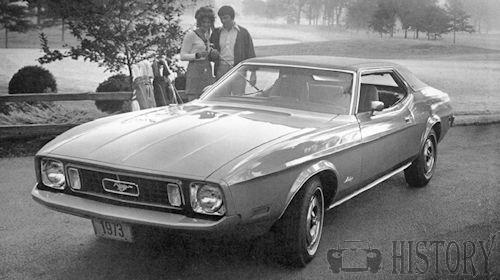 1973 brought some mild restyling. The urethane front bumper became standard, and was enlarged in accordance with new NHTSA standards. All Mustang models had their sportlamps re-purposed as turn signals, as the new bumper covered part of the front valance (and therefore the previous turn signal location). These new lamps - unlike their 1971/72 counterparts - were now oriented vertically. Both a Mach 1 and base grille were offered, with differing insert patterns.

Mach 1 decals were also revised in 1973, and the previous hockey stick side stripes of 1971–1972 became an option on hardtops and convertibles with the addition of the 'Exterior Decor Group'. Magnum 500 wheels, previously optional, were superseded by forged aluminum 5-hole wheels.

The 1973 model year Mustang was the final version of the original pony car, as consumers switched to the smaller Pintos and Mavericks.

No Shelby version of the 1971–1973 Mustangs were produced, with the exception of a small number of 'Shelby de Mexico GT-351' cars manufactured under license in Mexico, and 14 'Shelby Europa' vehicles modified and decaled by a private importer, also under license.