The Ford E-Series, also known as the Ford Econoline in Mexico and Ford Club Wagon, is a line of full-size vans (both cargo and passenger) and truck chassis from the Ford Motor Company. The line was introduced in 1961 as a compact van and its descendants are still produced today,

Based on the compact Ford Falcon, the first Ford Econoline was introduced for the 1961 model year. Sized roughly to compete with the Chevrolet Corvair 95 (Greenbrier Sportswagon) and Volkswagen Type 2, which was 172.3 in (4,376 mm) long. It was originally offered as a cargo van, an eight-passenger van with three rows of seats (which carried the Ford Falcon name) and as a pickup truck. A 165 lb (75 kg) counterweight was fitted over the rear wheels to balance the front-heavy vehicle; this was sometimes removed by later owners. The implementation of situating the driver on top of the front axle with the engine near the front wheels is called, in the US, a "cab over" short for cab over engine configuration. In Europe it is called a "forward control" vehicle. The body styling borrowed heavily from the, smaller, UK produced, Thames 400E which had been in production since 1957 and the 1956-64 Jeep Forward Control.

Instead of the rear-mounted engine used by Volkswagen and Chevrolet, the first E-Series had a flat nose with the engine between and behind the front seats. Early models had a 144 CID 6-cylinder engine with a three-speed manual transmission. Later models had a 170 CID or 240 CID engines with a three-speed manual or automatic transmission. It was an immediate success with utilities like the Bell Telephone System.

In its first year, 29,932 standard vans, 6,571 custom Econoline buses, 11,893 standard pickups and 3,000 custom pickups were made. The success of the Econoline led to its layout adopted in 1964 by the Chevrolet Van/GMC Handi-Van and Dodge A100; it would also be revived in the first American-market minivans sold by Mitsubishi, Nissan, and Toyota.

In rural Canada, where automobile dealers were scarce, the Econoline was sold as a Mercury alongside the M-Series truck lineup. Only the first generation of Econolines were sold as Mercurys; the next van sold by the division would be the 1993 Villager minivan. 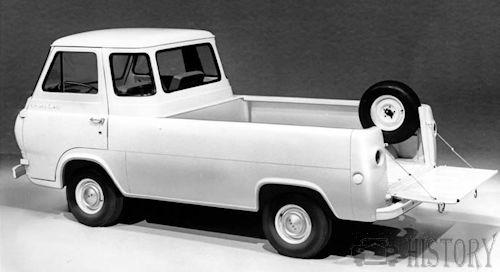