The Ford Cargo is a truck offered by Ford on the European market between 1981 and 1992 .

The Ford Cargo truckwas  offered In Asia , Oceania and Venezuela , the model is known as the Ford Trader . There are further developed models of Ford Cargo as well as in South America still offered today. The cargo is also produced by Otosan in Turkey and in addition to the Asian and Oceanic markets, models are also exported to the Middle East and Eastern Europe.

The Ford Cargo was first presented in 1981 as a successor to the previous models of the Ford D-series / Ford N series and in the range of lighter models also the Ford A-series to which had already approached the Ford Transit . The total weight was initially between 6 and 15 t, with mainly models of the 7.5-t class and the range just over 9 tons total weight were sold.

The cargo was compared to its predecessor a complete redesign with standing under the cab diesel engine . The cab was modern in design, was relatively angular and had a steeply rising front of the vehicle with little inclined rear windshield. The doors had next to a normal side window on a front additional window, which was pulled down for better visibility of smaller road users next to the vehicle on both sides to the waistline above the fender. One square, horizontal headlight and turn signal per side was above the bumper next to the grille, which was mostly held in matt black plasticappropriate. The cab was based on earlier American design and also the stylistically American taste following predecessors of the N series not run in full vehicle width, but the fenders were designed slightly wider to cover the full vehicle width. On offer were a Nah- and a long-distance traffic house for the larger versions; However, the latter also had only the reduced width and only the fenders were issued correspondingly wider. 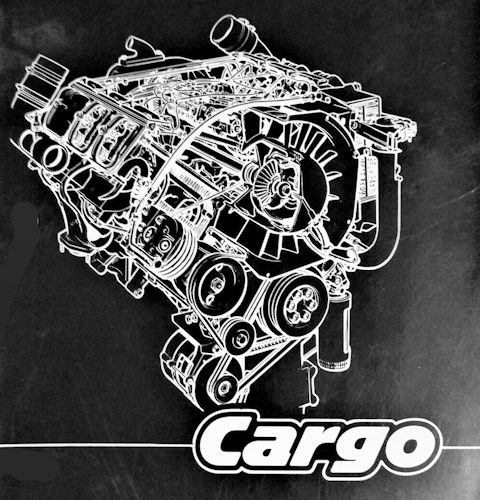 With a decline in production and foreseeable production cessation of the long-distance truck Ford Transcontinental from 1982 models were also offered for the heavy long-distance use, which, despite large chassis, the relatively small cab received. In these variants, air-cooled diesel engines from Klöckner-Humboldt-Deutz (V6 air-cooled 200 hp) and water-cooled Cummins units (R6 water-cooled 280 hp) were used due to a lack of supply .

The Ford Cargo was designed from the outset as a public transport and distribution truck and both of the equipment, driver's cab as well as motorization for long-distance transport little suitable and inferior to the competitors from the outset. The Ford Cargo trucks were manufactured throughout the production period for the European market at the British Ford plant in Langley near Berkshire . After all, the cargo scored a respectable success in the United Kingdom was temporarily market leader in the field of light commercial trucks.

With the discontinuation of Cargo in the United Kingdom in 1992, Ford withdrew from the European truck business. The British manufacturing plant was already sold to the competitor Iveco before the end of the production of Ford Cargo . Unofficial successor to the Ford Cargo was thus the Iveco Eurocargo , for the rare heavy models of Iveco EuroTech . Both models also temporarily bore the Ford brand logo on the vehicle front in the British Isles.

The cargo is a world vehicle and some of its offshoots are or have been built in various states. So he is still offered in a revised version in South America , as a trader in Venezuela . In the North American market, the vehicle was also sold as Freightliner Cargo and Sterling Cargo and replaced in 2004 by the Ford LCF .In India he is produced by the manufacturer Ashok Leyland as Ecomet, as well as in Sri Lanka by Lanka Ashok Leyland.In Turkey , the Ford Cargo is built at Otosan , since 2012 there is a completely revised model series, which still includes heavy-duty long-distance transport models and is also exported to various countries. From here, cargo is exported to the Middle East and Eastern Europe. As a Ford Trader, it is exported to Oceania and Asia.Panhard built a military version of the cargo as Panhard TC54.