The car had a four cylinder in-line engine with a displacement of 1,172 cc, which was developed from the 0.9-liter engine of the model Y by enlarging the bore from 56.6 mm to 63.5 mm (2.5  inches ) was used in other sporty cars. The stroke of 92.5 mm remained the same. The engine built to 1962 made 30 bhp (22 kW) at 4,000 rpm The car reached 110 km/h and consumed about 7 liters of gas / 100 km.. The rigid axles at the front and rear were suspended on push rods with a ball joint and transverse leaf springs. The construction had been since Model T. The cars were equipped with a three-speed gearbox.

In addition to the two sedans with 2 or 4 doors, there was a 4-seater touring car sporty, with distinguished exterior And proper driving characteristics. The carefully tested weight distribution gives a good grip at high speeds.Plenty of space between front and rear the seat. The convertible top, which is extremely easy to fold up, is completely built into the body.Artificial leather upholstery is standard for this model, which can also be obtained with genuine leather upholstery for additional cost.The body is delivered in etc several colors. Synchrogeared, powerful, soft-acting brakes and a reliable, the touring car which is very much sought after today as the rarest version as below. There was also a De luxe version, the CX , whose trim parts were chrome-plated.From 1934 to 1936 the model was also built in Spain . Successor from 1937 was the Ford Ten . In three years, 96,530 Ford Model C Junior were built. 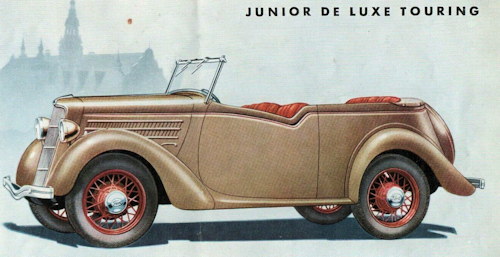