The Mondeo was launched on 8 January 1993, and sales began on 22 March 1993. Available as a four-door saloon, a five-door hatchback, and a five-door estate, all models for the European market were produced at Ford's plant in the Belgian city of Genk. The Sierra had been built there since its launch in 1982, although until 1989, right hand drive Sierras had also been built in UK at the Dagenham plant

Intended as a world car, it replaced the Ford Sierra in Europe, the Ford Telstar in a large portion of Asia and other markets, while the Ford Contour and Mercury Mystique replaced the Ford Tempo and Mercury Topaz in North America. Unlike the Sierra, the Mondeo is front-wheel drive in its most common form, with a rarer four-wheel drive version available on the Mk I car only. Instigated in 1986, the design of the car cost Ford US$6 billion. It was one of the most expensive new car programs ever. The Mondeo was significant as its design and marketing was shared between Ford USA in Dearborn, and Ford of Europe Its codename while under development reflected thus: CDW27 signified that it straddled the C & D size classes and was a "World Car".

The car was launched in the midst of turbulent times at Ford of Europe, when the division was haemorrhaging hundreds of millions of dollars,and had gained a reputation in the motoring press for selling products which had been designed by accountants rather than engineers. The fourth generation Escort and Orion of 1990 was the zenith of this cost-cutting/high price philosophy which was by then beginning to backfire on Ford, with the cars being slated for their substandard ride and handling, though a facelift in 1992 had seen things improve a little. The Sierra had sold well, but not as well as the all-conquering Cortina before it, and in Britain, it had been overtaken in the sales charts by the newer Vauxhall Cavalier. Previously loyal customers were already turning to rival products and by the time of the Mondeo's launch, the future of Europe as a Ford manufacturing base was hanging in the balance. The new car had to be good, and it had to sell. 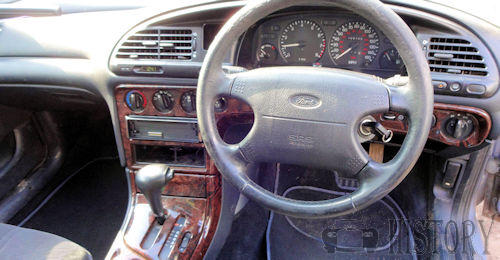 Despite being billed as a world car, the only external items the Mondeo shared initially with the Contour were the windscreen, front windows, front mirrors and door handles. The CDW27 project turned out not to be a true world car in the sense that the original Ford Focus, the Mk V Mondeo (known in the US as the 2013 Ford Fusion) and the Mk VI Ford Fiesta would later be, one design for the world.

A large proportion of the high development cost was due to the Mondeo being a completely new design, sharing very little, if anything, with the Ford Sierra. Over optimistically the floor pan was designed to accept virtually any conceivable drivetrain, from a transverse four to a longitudinal V-8. This resulted in a hugely obtrusive and mostly disused bellhousing cover and transmission tunnel. The resulting interior front of the car, especially the footwells, feel far more cramped than would be expected from a vehicle of this size. The Mondeo featured new manual and automatic transmissions and sophisticated suspension design, which give it class-leading handling and ride qualities, and subframes front and rear to give it executive car refinement. The automatic transmission featured electronic control with sport and economy modes plus switchable overdrive.

Safety was a high priority in the Mondeo design with a driver's side airbag (it was the first ever car sold from the beginning with a driver's airbag in all of its versions, which helped it achieve the ECOTY title for 1994), side-impact bars, seat belt pretensioners, and ABS (higher models) as standard features. Other features for its year included adaptive damping, self-levelling suspension (top estate models), traction control (V6 and 4WD versions), and heated front windscreen, branded Quickclear.

During its development, Ford used the 1986 Honda Accord and 1990 Nissan Primera as the class benchmarks that the CDW27 had to beat.An official Ford brochure, which explains the development of the Mondeo, is freely available here.

Along with an all-new platform, the Mondeo also used Ford's then-new Zetec engines, first seen in 1991 in the Ford Escort and Ford Fiesta.

An alternative to the Zetec engines was the Endura-D 1.8 L turbodiesel. This engine had origins in the older 1.6 L diesel design used in the Fiesta and elsewhere. Although not without merits, it was not seen as a strong competitor to other European diesels such as that produced by Peugeot. The contrast between this unit and the competition seemed enormous by the time the engine was dropped in 2000. Strangely, the diesel powered vehicles could easily be distinguished by dint of their having a slightly redesigned grille.

A less popular engine (for the UK and Ireland) was introduced in 1994 in the form of the 170 brake horsepower (130 kW) 2.5 L 24-valve V6 Duratec unit, primarily included for markets where four-cylinder petrol engines are not favored and are usually intended for the upmarket European buyer. This engine, first unveiled in the Mondeo's North American cousin, the Ford Contour, is characterized by its smooth operation, chain-driven camshafts and an ability to operate using only half its 24 valves at low engine speeds. Fuel economy was poor, the automatic even worse than the manual (and far less reliable). This engine was originally branded 24v (when valve count was all important), but later on sold as the more glamorous sounding V6.

This engine was also used to introduce the new "ST" brand to the Mondeo range as a flagship model (with less specification than a Ghia or a Ghia X), the ST24 in 1997.

The power of the engine stayed at 170 bhp (130 kW), the same as other 2.5 L-engined models (so was slower than a Mk I 24v), but the ST featured unique cabin trim (half leather seats), unique 16 in alloy wheels (that were originally only available on a Ghia X Estate), and a full Rally Sport Appearance Pack body kit as standard, The bodykit option was listed as a delete option for those that did not want it fitted as standard.

Although neither of these models ever sold in high numbers, the marketing was important to Ford, as it was an introduction to the ST range as a sportier side to the full range, especially significant as apart from the Focus RS, both the XR and RS model ranges were phased out during the 1990s. 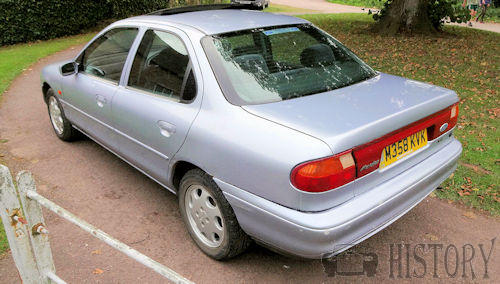