The Ford Vedette was built by Ford Societe Anonyme France ( Ford SAF ) in the automobile plant Poissy produced from 1948 to 1954. A post war car of a more luxury class .

The vehicle was unveiled in 1948 at the Paris Motor Show, but was completely designed in Detroit . It was similar to the contemporary Mercury models, but had a 2158 cc V8 engine with side valves , the 1936 in France under the name Aquilon(Roman god of cold winds) had been introduced. The body was bolted to a separate, ladder frame chassis.

This engine had been already fitted in the the pre-war Matford . This made only 60 hp (44 kW). Reasons for the poor power output were the very low compression (6.8: 1) and the laterally standing valves due to the fluctuating and often poor quality of the fuels at that time. The intake manifold had to divert the mixture several times, so that it reached from the downdraft carburetor from below through the cylinder block the cylinder, the exhaust gases were passed in three channels through the engine block to the outside. This resulted in a high cooling load and uneven heating of the cylinders.

Added to this were the limitations of only three bearing crankshaft. Permanently high speeds, as they are common in highway driving, lead in this engine vibrations of the crankshaft, which are clearly audible in the car as a strong hum and cause increased wear to material fatigue or even destruction. Therefore, the engine later came from Simca for the 1961 model year of the Vedette Chambord modified once again: The crankshaft received a vibration damper. But not even 4000 of them were made in France for this model year. After that the production of this engine was finished in Europe. However, Simca Brasil continued to build the car almost unchanged. With some changes, which also concerned the engine, the production ran until 1969. 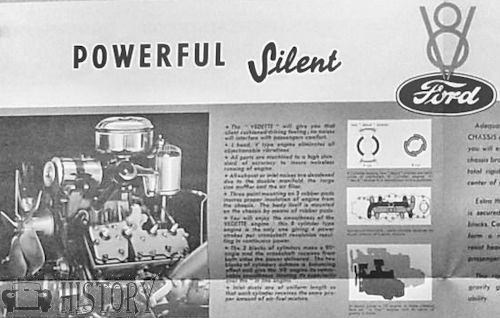 The front axle of the Ford Vedette of the first generation was different than the same old Ford Taunus G93A , which had a front axle rigid, designed as independent suspension with upper and lower wishbones , coil spring and telescopic damper. The rigid rear axle was guided with leaf springs and sprung. Only the successor of this first Ford Vedette with self-supporting body, which came after the sale to Simca in 1954 as Simca Vedette on the market, received a new suspension with strut and wishbone MacPherson type . For the first time was called the MacPherson strut construction in English Ford Consul / Zephyr with Self-supporting body from 1950 on this was installed.

Since Poissy after the war as an assembly plant because of war damage could not immediately start a complete car production, the first vehicles were manufactured by the French body manufacturer Chausson in Gennevilliers . Chausson was at that time a specialist for buses, which remained the main product even after the takeover by the Renault subsidiary Saviem . Another well-known vehicle, whose body Chausson produced, was the 1968 produced Opel GT, The raw materials had in the post-war period not too high quality, and important components were allegedly of low quality. This contributed to the limited popularity of the model. During the six years of production, there were the Vedette in various designs: four-door hatchback and suicide doors behind, later a four-door sedan , based on the model hatchback four-door Cabriolimousine , Sunliner called, whose roll roof could be rolled over the entire passenger compartment, a two-door coupe and a two-door convertible derived therefrom with the name Décapotable, The design with a separate frame made this variety of body styles possible.

Under the direction of the new president of Ford France, François Lehideux , the model was revised in 1950 and it got a stiffer frame. In 1952, the car underwent a thorough facelift with an undivided windshield , a redesigned car interior with cigarette lighter , better shock absorbers , brakes, and a larger trunk that did not make the car look any better. At the Paris Motor Show in 1952, a luxury version of the Vedette was unveiled, the Ford Vendôme , which was powered by a larger 3923 cc V8 engine with 84 hp (62 kW), called Mistral , as in trucksused by Ford France. In the same year, the five-door and five-seat hatchback model Ford Abeille ( "Bee") with a two-piece, horizontally split tailgate out. With its sheet-lined rear window cutouts and a payload of 500 kg, it was considered a practical and comfortable combination . In the summer of 1952,  a Vedette with a streamlined body on a tubular frame in Montlhéry broke several records in the class up to 2 liters, attracting some attention, which took advantage of the advertising.

Since the end of the war, Ford had been trying to sell the plant since the end of the decade, given the unsatisfactory sales performance and the Poissy strikes. A good opportunity arose in 1954 when Henri Théodore Pigozzi , founder of the increasingly successful French automaker Simca , was looking for a new factory for his growing business. Ford France was Simca merged , with Ford earning both the factory in Poissy and all models produced there, including the renovated Vedette. The new model debuted under the name Simca Vedette but was sold on some markets until 1956 as Ford Vedette.