The Ford Transit Custom is a van of the car manufacturer Ford , which is offered since the second half of 2012. As a minibus it is available under the name Ford Tourneo Custom .

The goal of Ford is to gain more market share with the model in future compared to competitors such as the VW T5 . For this purpose, the vehicle was adapted to the design and ride comfort of a car , bringing the utility into the background. Especially as a commercial vehicle, the Ford Transit 7th Generation is offered, which differs both technically and in design. The Transit Custom has the basic front-wheel drive with standard 6-speed manual transmission . The engine is a 2.2-liter diesel engine with common-rail injectionwith 74 kW (100 hp), 92 kW (125 hp) or 114 kW (155 hp) is used. All models come standard with a start-stop system . With an external height of less than two meters, the vehicle can also enter most public parking garages. The interior of the Transit Custom models was based on the car models of Ford. The dashboard is similar to the Ford C-MAX . Among other things, there is an entertainment and communication system for the Transit Custom called sync with integrated emergency assistant, which automatically notifies emergency personnel in an accident, and transmits the vehicle position. In addition to ESP , driver and co-driverAirbag, there are also side and head airbags. Special Ford gimmick is a heated windscreen as well as a misfuelling protection. In addition to a reversing camera, a lane assistant and a fatigue warning are included as technical innovations in this vehicle class. The Transit / Tourneo Custom has been built since summer 2012 in the Turkish plant Kocaeli .

The Transit Costum received a facelift in 2018. The interior has been completely redeveloped and the front has been adapted to Ford's current design guidelines. The sides and the stern were not changed,

The Transit Custom is available as a panel van , flatbed with single or double cab . This was first introduced at the Birmingham Commercial Vehicle Show in April 2012.The van is also in the smallest version with three europallets loadable. A flexible partition behind the seats allows a load-through option for long items under the seats. A novelty is the retractable roof rack in the roof. The standard model of the panel van is equipped with a steel partition. It is available with one or two sliding doors and a tailgate, alternatively two laterally hinged rear doors. Optionally, the van is also available with a double cabin.

From autumn 2013, a model with high roof will also be available, which will increase the loading volume to up to 8.3 m³. In the spring of 2018 there was an optical facelift.the interior and front were completely redeveloped. There are also Xenon headlamps for an additional charge.

The Transit Custom Kombi is available for passenger transport of five or six passengers plus cargo. The Transit Custom Bus can accommodate eight or nine passengers. As with the Tourneo Custom, the seats can be folded down or removed. In contrast to the Tourneo, the standard equipment is lower, since these models are an offer especially for commercial customers.

In collaboration with Westfalia Mobil , a motorhome variant of the Transit Custom is also available. The Westfalia motorhomes based on the fourth, fifth and sixth generation Ford Transit have already been offered under the name "Nugget" .

Under the name Tourneo Custom, the vehicle is available as a minibus with either up to eight or nine seats, with 30 different seat configurations possible. The Tourneo Custom was presented to the public for the first time at the Geneva Motor Show in March 2012.  The seats in the second and third row can be folded up or removed individually. Each side sliding door belongs, as well as running boards, to the standard scope of the Tourneo Custom. Optionally, leather upholstery, sunblinds for the side windows and a multi-zone air conditioning system for the second and third row seats are also available. 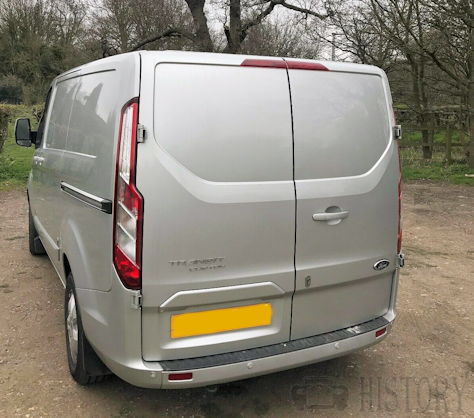