Ford Motor Company used the Zetec name on a variety of Inline-4-cylinder automobile engines. It was coined to replace "Zeta" on a range of 1.6 L to 2.0 L multi-valve engines introduced in 1991 because Ford was threatened to be sued by Lancia who was the owner of the trademark The company used the name widely in European advertising and later introduced it to the North American market with the Contour.

The Zetec name was so recognized that Ford decided to apply it to other high-tech four-cylinder engines. It is used across many engine types in Europe today even though the original Zeta design ended production in 2004. Ford also used the "Zetec" name for a trim level designation in certain markets.

A Formula One engine produced for Ford by Cosworth was also badged as a Ford Zetec, although this was technologically unrelated. This engine (a 3.5 litre V8) was used by the Benetton team in 1994, and powered Michael Schumacher to his first World Championship title.

The Zetec name has been used on many different engines:

The first Zetec-branded engine was the Zeta family, introduced for the 1992 model year powering the fifth generation of the European Ford Escort, the third generation Orion and the Mk.3 Ford Fiesta. The engine was originally available in 1.6 and 1.8 litre versions with a 2.0 litre version appearing in 1993 in the all-new Mondeo. The "Zeta" name was dropped in favour of "Zetec" when Italian car maker Lancia threatened to sue Ford for trademark infringement. The codename "Zeta" was originally used for the design of the cylinder head. A number of different systems were evaluated, and each one had a different codename using the Greek alphabet. The Zeta concept was the winner and the 4-valve-per-cylinder, DOHC design was used for the head of the replacement for the CVH in Europe and the US. The original manufacturing plan involved replacing the Dearborn manufactured CVH with Zeta. This resulted in the need to retain much of the architecture of the US CVH block. However, later in the development process, the plan was changed and the Chihuahua engine plant in Mexico was rebuilt to allow manufacture of the US engines. For Europe the decision was taken to build Zetas in Bridgend (Replacing CVH) and in Cologne. The US (2.0L) and European base engines were almost identical. However, crucially, the US management insisted that the US engines had to be "freewheeling" The fuel economy penalty with the freewheeling system (around 1–2%) was considered to be too great for European engines. The result was that the engines used different pistons. Another difference was that the US engines featured sinter forged connecting rods versus conventional cast rods in Europe.

Early versions of the engine had a problem with sticking valves – far more evident in the UK (and in cold climates), where a driving style with earlier gear changes is more common than on the Continent – unless a special Ford formulation of oil was used. After small changes in 1995 to fix this problem the engine was known as the Zetec-E. This engine received a plastic inlet manifold and EGR derived from the Mondeo.

The Zetec had another redesign in 1998. This version, the Zetec-R, had a two-piece crankcase which helped damp out noise and vibration, conventional tappets with shims rather than hydraulic ones, and longer connecting rods with a lower piston compression height. This engine was used in turbocharged form in the Focus RS and had 212 bhp (158 kW; 215 PS) (dubbed Duratec RS). It was also used in the Focus ST170 with a cylinder head modified by Cosworth with Variable Valve Timing on the inlet cam and had 170 bhp (127 kW; 172 PS).

Production of the Zeta family lasted from September 1991 through December 2004. Displacement ranged from 1.6 L to 2.0 L. It was replaced in most applications by the Mazda MZR-based Duratec 20, though some Zetec-SE engines were used as replacements on the lower end. Ford Power Products sells the Zeta in 1.8 L and 2.0 L versions as the MVH.

The 2.0L Zetec engine has seen some issues. Although the block and cylinder head are thermally stable, the coolant outlet housing for the thermostat is not. The housing used in the 2000–2004 model year US Ford Focus and 2001–2004 model year Ford Escape with 16-Valve DOHC engine is made from ABS plastic. It is bolted to the surface of the cylinder head on the right side of the engine with three bolts. The mating surface seals to the cylinder head with a rubber O-ring style gasket. The O-ring is held in place by a lip on the housing which is prone to cracking. The immediate inner portion of the housing will exhibit pitting and bubbling. Over time, pieces of the lip will break off, releasing plastic fragments into the cooling system. These fragments have not been known to cause any severe damage to the cooling system but the damaged lip on the housing will cause the O-ring seal to rupture. This allows coolant to leak out onto the upper transmission bell housing.

The 2.0L version in the North American Ford Contour/Mercury Mystique was a closely related replacement for the previous CVH engine used in the Ford Escort.

The camshaft timing of the 2.0L engine is:

The advanced Zetec-SE (sometimes badged as Zetec-S) was developed in collaboration of Yamaha and Mazda, under the Sigma codename. It ranges in size from 1.25 L (1249 cc) to 1.7 L (1679 cc). It is very different from the Zeta engine – the intake and exhaust are even on opposite sides. It was the first engine to use a plastic intake manifold.

This engine is sold under the Sigma name in some regions, while Mazda uses the MZI name. It is also sold as a crate engine by Ford Power Products as the ZSG.

From 2002 on, Ford started to badge their engines as Duratec. The 1.7 L version was dropped when the production of the Puma ended. Now the 1.6 L is also available with variable valve timing, known by Ford as Ti-VCT (Twin Independent Variable Camshaft Timing)

In 2000, Ford of Brazil developed a cheaper version of the Zetec-S engine with single cam and 8 valves driven by a chain. As a result, this engine exhibits rougher behaviour, producing more vibration and noise. On the other hand, it has a superb torque output thanks to the addition of the Rocam (rollerfinger camshaft) feature.

In 2003, the Zetec-Rocam engine was introduced in Europe, but labeled as Duratec 8v, for the SportKa and StreetKa models. Later a 1.3 L version was also released as an option for the standard model, but the European versions of the engine are produced in the South Africa plant.

In October/2004 a newer bi-fuel version was introduced labeled "1.6 L Flex", capable of running on both petrol and ethanol, even mixed at any proportion. This version also featured "Compound High Turbulence" chambers, as used on the CHT engine.

Zetec name as a trim level

In 1998, Ford of Britain applied the Zetec name to a trim level in the Fiesta range, replacing the Si. Petrol variants of the Fiesta LX were also renamed "Zetec LX," although this ceased within months.

Since then, the Zetec name has become a key staple of the Ford trim level hierarchy, serving as the sports-styled variant in most ranges. In October 1998, the then-newly launched Focus also used the name; and the Mondeo and Galaxy ranges also adopted the name before the decade was out.

Ford's "niche" models, such as the Ka and Fusion did not initially adopt the name, although even these models now include Zetec-badged variants.

Nowadays, the Zetec name is used exclusively in a trim level capacity, with no engines called as such. Zetec models are often seen as the staple of Ford's ranges, with Ford often creating "spin-offs" of Zetec models and running promotions on Zetec models in the range. Every passenger vehicle in the Ford of Britain range bar the Ford Focus Coupé-Cabriolet now includes a Zetec badged model; the same cannot be said of any other Ford trim level. 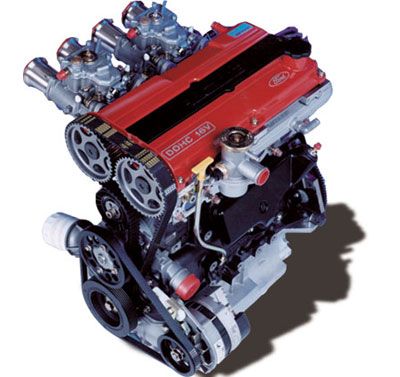 Initially there were 90, 105 and 115bhp 1800cc Escort versions, with 115 and 130bhp 2 litre  Mondeo units too. There were also 130bhp RS1800 Fiesta/XR3i variations with revised cams and  re-mapped ECU’s. The hottest n/a version was the ST170 with solid lifters, steel rods,  waisted valves and variable valve timing (VVT). The motor went on to power the Focus RS but  in turbocharged form. Both the ST and RS engines were confusingly re-badged as a Duratec.

A power  boost valve will help eliminate the flat spot between 3,300-3,500rpm. You can actually use the standard injection combined with a new Weber Alpha kit that works  with the OE inlet manifold. Fitments are for the silver top 1800s, and both silver and  black top 2.0 engines. Power achieved is, approx 150bhp for a 1.8 130PS and 160bhp for the  2.0. However, these are really the limit of the standard induction and further increases  are not possible, unlike their other kits.

It has to be said that although these kits have  been developed for the kit car market, we do not see any reason why they can’t be fitted to  a FWD Zetec engined car. Webcon cannot confirm fitment but like us believe it should work.

If you want to go beyond the range of the standard induction though, we can supply a Weber  Alpha kit, which replaces the system altogether and is incredibly comprehensive - all is  there for you to bolt it straight on, including manifold, linkage, even air filters. On an  1800 130PS engine, you should see 155bhp and 165bhp on a 2 litre. Either of these two systems will provide enough fuelling for plenty of future modifications.  Fit one of our stage 1 heads plus a pair of Kent FZ2002 cams and you should see power  around 185bhp. If you want to go beyond this ‘Fast Road’ stage then you’ll need  Stage 2 heads which feature larger inlet valves.

The Kent FZ2003 cams will give you between 200-240bhp depending on stage of head, coupled  with 48mm throttle bodies. However, at this stage, you’ll need larger followers machined  and installed, otherwise the cam lobe won’t be completely ‘seen’ by the follower. We’d also  recommend a capacity increase to 2.1 litres, with an 86mm bore plus our Accralite pistons.

The standard crank is very strong but around these levels we’d encourage the switch to  steel along with our Farndon H-section rods.