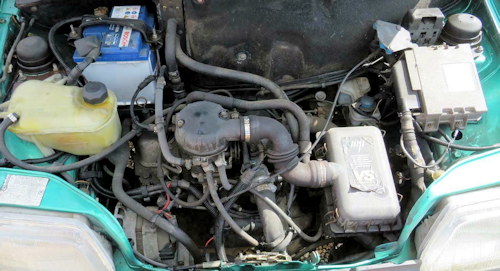 The Fiat "100 series" engine are vertical with the distribution chain camshaft mounted in the crankcase , to rods and rocker arms with head in aluminum alloy to 8 valves , 3-shaft crankshaft, with transverse front or rear longitudinal layout produced by the Italian car manufacturer FIAT at Mirafiori and then in Bielsko-Biała from 1955 to 2000 . It was gradually replaced by the FIRE engine starting in 1985.

The " Fiat 600 ", the first subcompact Italian postwar presented in 1955, was equipped with this new engine with 633 cc designed by men of Dante Giacosa in four months, after the previous design of an engine air-cooled turned out to be too advance for the time.

Born as a rear and longitudinal engine, This was able to evolve for a long forty years of production, becoming an engine for modern cars with front-wheel drive , arranged transversely, with displacement gradually increased up to 1050 cm³ and power that rose from 21 hp originating in the A112 70 Abarth .

The engine was inspired by previous experiences made on the " 1100 " engine and introduced with respect to the "Topolino" unit , the single-piece monoblock base instead of four pieces, the overhead valves instead of the lateral ones and the intake manifold integrated in the head .

The first models were fueled by carburettors , while the injection , only single point type, appeared in 1992 , with the obligation of "catalytic converter " for emissions.

A multifunctional engine, produced in Italy, Argentina, Spain, Poland and Yugoslavia, adapted to cars with an " all-back " or " all-out " layout , for commercial vehicles and sports cars. It has passed various anti-pollution regulations, with adaptations to electronic injections and catalysts, and has even had applications for avant-garde "biogas" generators. It has also been used in rallies , in tourism and uphill races, as an approach motorization for generations of pilots, up to the "Panda Monza" formula of the 80s .

Compared to the "Topolino" engine, it featured overhead valves (already introduced on the 1949 500B), camshaft in the crankcase rather than lateral, forced water circulation by pump instead of convective motion ("radiator") , the intake manifold integrated in the fusion of the head and the ignition with points and distributor instead of a magnet.

Vehicles in order of appearance