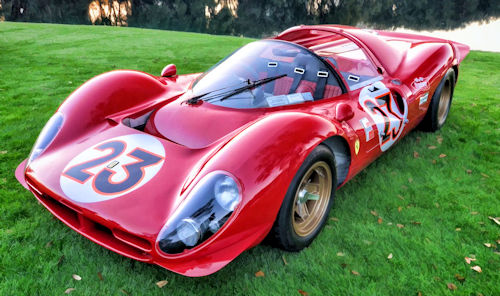 1967 was a banner year for the Enzo Ferrari motor company, as it saw the production of the mid-engined 330 P4, a renowned V12 endurance car meant to replace the previous year's P3.

Only four Ferrari P4-engined cars were ever made: one P3/4 and three 330 P4s. Their 3-valve cylinder head was modeled after those of Italian Grand Prix-winning Formula One cars. To this was added the same fuel injection system from the P3 for an output of up to 450 hp (335 kW).

Since then, the fate of the these four nearly legendary cars has been the subject of much attention. All of the P4s built are accounted for. By chassis number:

Since 2002, Ferrari S.p.A. has continuously published the fact on their official web site that in Ferrari S.p.A's sole discretion Ferrari P3/4 Chassis 0846 has been owned by James Glickenhaus since July 2000, when he bought it from David Piper as a replica . The Glickenhais car is now proven to not be the real with proven detailed pictures of the chassis and engine of the real car from Daytona 1967 and Le Mans 1967.