The Ferrari 365 GTB/4, better known by the unofficial name Ferrari Daytona, is a Gran Turismo automobile produced from 1968 to 1973.

It was first introduced to the public at the Paris Auto Salon in 1968 and replaced the 275 GTB/4. The Daytona was replaced by the mid-engined 365 GT4 Berlinetta Boxer in 1973.The sporty and elegant bodywork (doors and bonnets were in aluminium), designed by Leonardo Fioravanti for the Pininfarina bodywork, covered with a completely new frame.

The unofficial Daytona name is reported to have been applied by the media rather than Ferrari and commemorates Ferrari's 1-2-3 finish in the February 1967 24 Hours of Daytona with the 330P4. In honour of the victory obtained in 1967, the new sports car from the " Cavallino " company was nicknamed the Daytona.

The Ferrari "Daytona" is a high collection car, handcrafted, it was the last supercar of the "Casa di Maranello" produced before the advent of the "Fiat Group" and built with the front engine. The technical developments of the 1970s and 1980s saw the production of exclusively rear-engine Ferrari supercars. It will take well over 20 years to find a Ferrari with this "classic" setting, which will only be revived with the advent of the Ferrari 550 Maranello. Both the "coupé" version and the very rare "spider" version are much appreciated by enthusiasts.

The five-speed manual transmission (of the transaxle concept) was mounted in the rear for optimal weight distribution, and a four-wheel independent suspension featured wishbones and coil springs.with the self-locking differential, according to the transaxle.The suspension at the front and rear followed the layout of the 275 GTB / 4, which at the rear had abandoned the outdated rigid axle pattern to adopt a new geometry with independent wheels with wishbones. The brakes were self ventilated disc, with brake booster.

It produced 357 PS (263 kW; 352 hp) and could reach 280 km/h (174 mph). 0-60 mph (97 km/h) acceleration was just 5.4 seconds For the American version, slight modifications were made - the compression ratio was reduced to 8.8:1 and the exhaust system was equipped with a large central silencer, necessitating visible alterations to the primary pipes. 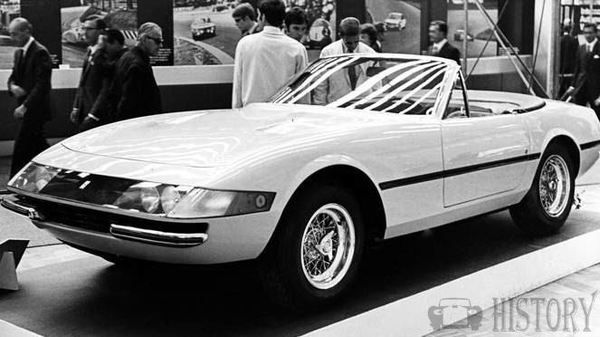 Although it was also a Pininfarina design, as with many previous Ferrari road cars (by Leonardo Fioravanti), the 365 GTB/4 was radically different. Its sharp-edged styling resembled a Lamborghini more than a traditional Pininfarina Ferrari.

Early Daytonas featured fixed headlights behind an acrylic glass cover. This particular setup was completely abandoned in 1971 favor of retractable pop-up twin headlights due to new safety regulations in the U.S., which outlawed headlights behind covers. Leonardo Fioravanti, designer, intervieved on TV car show had confirmed a popular rumor that it took him 7 days to design a Daytona.

In 1969, to satisfy the requests of the importer Luigi Chinetti for the North American market, the spyder version was presented, identical to the coupé in mechanics. Previously, at the 1969 Paris Motor Show, Pininfarina exhibited a sort of prototype of the "Daytona Spider" (chassis no. 12925, engine no. 251), with an apparently " plate " body. In reality it was a faux-cabriolet, or a fake open car, characterized by a showy satin aluminium roll-bar and a hood. covered with vinyl cloth. Despite the interest, the Spider version was produced several years after the prototype was presented.

The spyder version was requested above all for the American market by the importer Luigi Chinetti and it should be noted that the distinction between GTB / 4 coupé and GTS / 4 spyder is not so unambiguous, in fact many specimens of the spyder version originally came out of the Maranello factory with the 365 GTB / 4 nameplate as the closed version. Only very few examples of the original spyder version have the 365 GTS / 4 nameplate.

In 1971 a slight restyling only affected the coupé version, the Spider version not yet in production. The transparent Plexiglas strip connecting the front headlights (which became " retractable ") was eliminated and the interiors were updated. The change to the headlamps became necessary because a new US regulation had banned the previous solution. The Ferrari Daytona "Spyder" were produced exclusively in this restyled version with retractable headlights and differed from the initial prototype for the soft top which became completely foldable in canvas.

The coupé production ended in 1973, this was then replaced by the 365 GT4 BB, while the spyder of which the last examples were produced, to satisfy orders from overseas still open, remained in production for another year.

The generally accepted total number of Daytonas from the Ferrari club historians is 1,406 over the life of the model. This figure includes 158 right-hand-drive coupés, 122 factory-made spyders (of which 7 are right hand drive), and 15 competition cars in three series with modified lightweight bodies and in various degrees of engine tune. All bodies except the first Pininfarina prototype were produced by Scaglietti.In all, 1350 Daytona GTB / 4 were built (of which only 411 first series with plexiglass headlights) and 122 Daytona Spider not always commercially identified as GTS / 4, including the prototype. Of these 96 were destined for the North American market and were built with "US" specifications and only 25 plus the prototype were built with European specifications and of these only 7 had right-hand drive (for the English market).

Historically, and especially since the mid-1980s and early 1990s, there has mostly been a considerable market price difference between a real berlinetta and a real spyder. Many berlinettas were turned into spyders by aftermarket mechanics, often to increase the car's monetary value or simply because of the owner's preference for an open car.

The later 1972 Ferrari 365 GTB daytona with pop up lights

The first racing version of the 365GTB/4 was prepared in 1969: an aluminium bodied car was built and entered in the Le Mans 24 hour race that year (the car crashed in practice). Ferrari did not produce an official competition car until late in 1970.

The cars were not raced by the official Scuderia Ferrari team, but by a range of private entrants. They enjoyed particular success in the 24 Hours of Le Mans, with results including a 5th overall in 1971, followed by GT class wins in 1972, 1973 and 1974. In 1972 Ferrari 365 GTB/4s took the first 5 places of the GT class.

The final major success of the car was in 1979 (five years after production ended), when a 1973 car achieved a class victory (2nd overall) in the 24 Hours of Daytona. 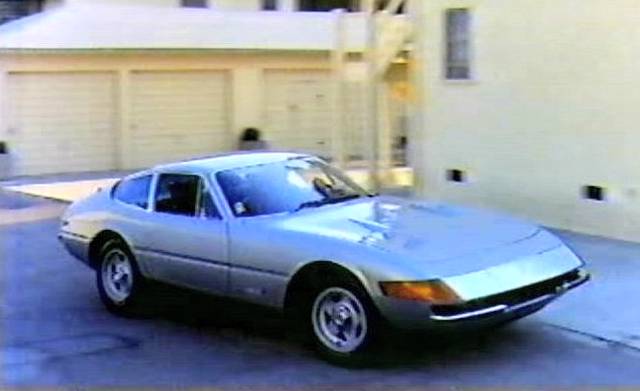 In the Columbo murder mystery "Short Fuse" Roddy McDowall is the owner of a Daytona.

A red Daytona Spyder was one of the "stars" of the 1976 film Gumball Rally. Other films in the 1970s featuring Daytonas were A Star Is Born, The Long Goodbye, Gone in 60 Seconds, The Swiss Conspiracy, and Herbie Goes to Monte Carlo. In 1988, a Daytona was featured in Rain Man.

In the 1980s, the car gained new notoriety on the first two seasons of NBC's hit television series Miami Vice. The black car used in the series was a replica built on a Corvette chassis. Ferrari execs were not pleased that their company and one of their products was represented on TV by an imitation car and sued the manufacturer of the kit for trademark infringement and trademark dilution.The Daytona replica was eventually destroyed on-screen and replaced with a donated Ferrari Testarossa, the company's newest model during the time.

In the 1990 film The Rookie, a Ferrari Daytona is stolen from a valet parking service and loaded on a semi-tractor trailer by the thieves. It is later wrecked in a collision.

The show Top Gear featured James May, in a 1.25 million pound power boat, racing Richard Hammond in a Ferrari Daytona from Portofino to Saint-Tropez. For May, the journey was rough, damaging the in-vehicle camera. Both Hammond and May were pulled over by the police. May won, but Hammond explained that the boat might have been the fastest way to complete the journey, but the car would always be the best method.

The cover of The Carpenters 'Now and Then' album features Richard Carpenter's red 365 Daytona coupé with Karen Carpenter in the front passenger seat. It was also dedicated in song metaphorically by Chris Rea, titled "Daytona" for his 1989 album, The Road to Hell.