For model year 1965 Dodge introduced the Monaco, which was based on the full-size model Dodge Polara, but only as a two-door hardtop coupe with sophisticated equipment and the larger engines was available. Thought was the Monaco as a competitor to more luxury cars such as the Ford Thunderbird. The chassis was integral, the front suspension: independent, wishbones, lower trailing links, longitudinal torsion bars, anti-roll bar, telescopic dampers, at the rear rigid axle, semi-elliptic leafsprings, telescopic dampers.

For model year 1965 Dodge introduced as the flagship model of the Monaco 500, which was based on the full-size models Dodge Polara / Dodge 880, but only as a two-door hardtop coupe with sophisticated equipment and the larger engines was available. Thought was the Monaco as a competitor to personal luxury cars the middle price range such as the Pontiac Grand Prix and the Ford Thunderbird, the standard equipment included, inter alia, centre console, clock, three-spoke steering wheel, special badging and padded dashboard different taillight and grille. The Monaco was powered by a 6.3-liter V8 with 315 hp, a 6.8-liter with 340 hp or a seven-litre V8 with 365 hp the larger, more powerful engines were also available as options. Dodge sold 13,200 1965 models.

From 1966 there was other body styles. Dodge restructured its full-size model program. There was now a base line, the Polara, and a better-equipped line, the Monaco. In the Monaco series, which was available as a hardtop coupe, sedan with or without B-pillar and as five-door station wagon in the program, served the special hardtop coupe, now under the name Monaco 500, again as a top version but was no convertible. The engines 1966 were a 6.3-liter V8 with 270 or 325 hp (the latter in the Monaco 500 series) and a new 7.2-liter V8 with 365 hp available.

In Canada, the "Monaco" name was applied for 1967 to all of the premium full-sized Dodge cars, replacing the Polara 880 at the top of the Dodge line. Taking the Monaco's place as a premium full-size model was the Monaco 500, which was available only as a two-door hardtop and convertible.

For 1968 there was little changes from previous year, before the next generation arrived. 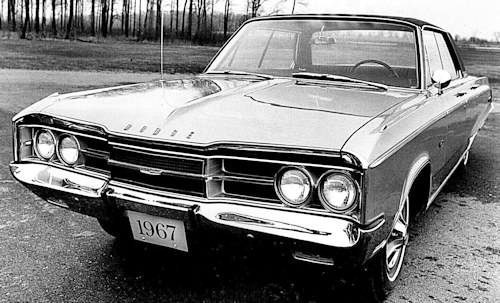