The Dodge WC series was a range of light military trucks produced by Dodge during World War II. The series included weapon carriers, telephone installation trucks, ambulances, reconnaissance vehicles, mobile workshops and command cars. They were replaced after the war by the Dodge M-series vehicles. WC was a Dodge model code: W for 1941 and C for half-ton rating. The C code was retained for the ¾ ton and 1½ ton 6×6 Dodges.

Dodge began producing light trucks immediately upon its formation in 1914. For the first few years these were based largely on the existing passenger cars, later specific chassis and body designs were used. Light- and medium-duty models were offered first, then a heavy-duty range was added during the 1930s and 1940s. Dodge produced its first prototypes of dedicated military trucks in late 1939: the 1/2 ton 4x4 VC series. Production of the VC series started in 1940. At the outset of World War II, Dodge produced the G-505 WC ½ ton series of military light trucks in 38 individual models, thousands of some models were produced, while only a few of some others were made. The WC ½ ton trucks replaced the 1940 VC-1 to VC-6 ½ton Dodge trucks which were also part of the G505 series. 79,771 of the ½ ton trucks were produced during late 1940–1942 under War Department contracts. WC models 1 to 50 were part of the 1/2 ton range and were 80% interchangeable in service parts with the later 3/4 ton models.

Common features of the 1/2 ton trucks were:

The Dodge G-502 ¾ ton 4×4 trucks were first introduced in late 1941. Standard vehicles in the ¾ ton 4×4 class were the WC-51 / WC-52 Weapons Carrier, Telephone Installation Trucks, WC-53 Carryall, and the WC-54 Ambulance. In the cargo trucks, the WC51 was identical to the WC52 but did not have the front bumper-mounted winch.

The table includes data on the relation between identification numbers and types of body fitted. For comparison, earlier Dodge military trucks of the 1/2 ton range are included.

Weapon carriers, two seater pickups with open cab. The open cab pickups could be fitted with an optional M24 machine gun mount,which bolted across the front of the bed. The mount could carry the M1918 Browning Automatic Rifle, as well as the M1919 Browning machine gun, and the M2 Browning machine gun.

Entering production during 1941 to early 1942, they were specifically designed to serve as military ambulances. These early variants are distinguishable from the later ones by having a curved radiator grille, while the later ones (WC51 onwards) featured a flat grille. These versions were given a longer 123 in (3,100 mm) wheelbase.

These models were built as signals trucks, designed to install and repair telephone lines, and were also known by the U.S. Signals Corps as the K-50 truck.

Fitted with dual rear tires. Mostly employed as an emergency repair truck whose purpose was to provide mobile facilities for emergency ordnance repair. Other types of bodies were produced, such as an oil service vehicle. 902 of these chassis were built. 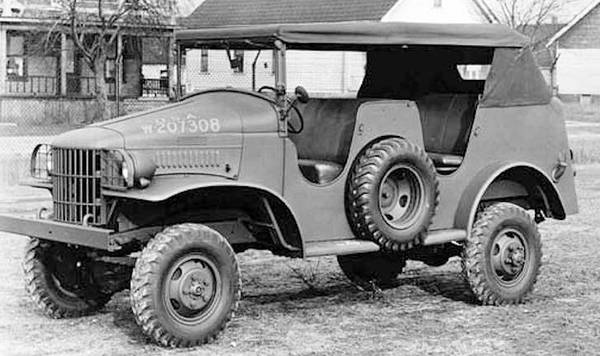