The Auto Union 1000 is a German car with a three-cylinder, two-stroke engine and front-wheel drive built from the late 1950s to the early 1960s.

It is the successor of the "Big DKW 3 = 6" (F93 / 94) and the only Auto Union passenger car with the manufacturer's name as a brand instead of DKW. In August 1963, the DKW F 102 followed as the last West German production car with a two-stroke engine. The Auto Union 1000 largely corresponded to the DKW 3 = 6 (F93 / F94). The main differences were the more powerful engine with more cubic capacity (981 cm³) and on the outside the four rings in the radiator grille and the words "Auto Union" instead of the DKW trademark on the bonnet. Later Apart from the enlarged engine, which now provided in the base model 44 bhp (33 kW), the 1000 featured the old four-ring Auto Union badge across the air grill along with the Auto Union name above it, in place of the DKW badge that had adorned the nose of the earlier model.

It was available as a four and two-door sedan with doors hinged at the front and as a four-seater coupe without a B-pillar. For the model year 1960 (from August 1959), the two-door sedan and the four-seater Coupé Auto Union 1000 S were given a panoramic windscreen. In 1961 the radiator grille was redesigned with vertical trim. The station wagon, known as the Universal, was produced from 1959 to 1963.

A three-door estate version was also offered, branded as the Universal, between 1959 and 1962. For the 1960s, the saloon was renamed Auto Union 1000S and received, a wrap-around windscreen.

The vehicles had a box profile frame and an all-steel body. At the front, the wheels were individually suspended from lower wishbones and an overhead leaf spring. The levitation axis known from the predecessors was installed at the rear. On request, the vehicles were also available with the " Saxomat " fully automatic centrifugal clutch. 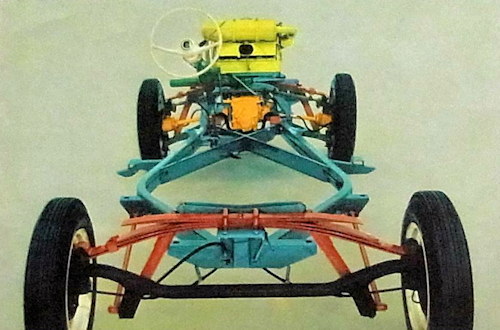 The Auto Union's 981-cc two-stroke three-cylinder engine was available in various states of tune. In the model year 1961/62, Auto Union introduced two-stroke separate lubrication using the "fresh oil automatic" developed in cooperation with Bosch. The system with a separate oil tank and oil pump should make it possible to fill up with petrol without the addition of oil, because petrol stations with a two-stroke mixture became less common. If the mixing ratio had already been reduced from 1:25 to 1:40 in 1956, the engine could now be operated at full load at 1:60 and at idle speed at 1: 400. According to advertising the new system should ensure especially the engine a longer service life, which was not achieved in practice. In the extremely cold winter of 1962/63 in Europe an unusually large number of crankshaft damage occurred because the oil, which was viscous at low temperatures, was not adequately transported through the thin line into the carburettor Power was delivered via a four-speed manual gearbox, controlled using a column-mounted lever.

After production in Germany ceased in mid-1963, the Auto Union 1000 S was manufactured by Veículos e Máquinas Agrícolas in São Paulo (Brazil) with minor retouching and in Argentina under license by Industrias Automotriz de Santa Fe (IASF) The line-up consisted of the two- and four-door sedans, the three-door Universal estate wagon, and built without changes until 1970 with about 30,000 copies manufactured. Only limited numbers of the coupé were built and licensed productions of the coupés and Spyder were also built in Spain.

The Auto Union 1000 Sp (Sp for special and not, as is often assumed, for the word "sport”) was a two-seater sports coupe or a two-seater roadster.

Compared to the Auto Union 1000 S, the engine output was increased mainly to 41 kW (55 hp) by higher compression (8: 1), but also by slight differences in the engine block and different carburettor system. This 1000 Sp was lower and brought about the name "narrow-gauge Thunderbird ", as the 1000 Sp was sometimes called in the press, to a top speed that at 140 km / h slightly exceeded the weaker motorized 1000 S coupe.

From the 62 models, both the Coupe and the Roadster a two-seater sports car were given rounded side fins at the rear. Subsequently (from chassis number 4,360 / March 1962) there were also disc brakes on the front axle and the fresh oil automatic. Like the other models, the AU 1000 Sp also has sheet metal reinforcements for attaching seat belts. With the use of the automatic fresh oil system, the 32/36 NDIX dual carburettor was replaced by the Solex 40 CIB falling gas carburettor.