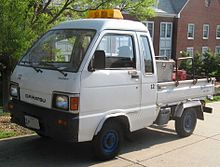 The seventh generation Hijet (S80) was a gradual development of its predecessor, introduced in May 1986. The biggest change was the switch to a more modern three-cylinder engine, the EB, although displacement remained just under 550 cc. It was also built in South Korea since 1992, by Asia Motors, as the "Towner". This version was later badged "Kia Towner", subsequent to Kia's takover. These vans were only exported to certain markets (such as Malta and Chile), according to the licensing agreement. Beginning in 1992, Innocenti also built this car for European markets as the "Porter", especially to circumvent restrictions on Japanese imports in some markets like Italy. This version has long outlived the original Hijet and is still in production. Unlike the Hijet, the Porter has also been available with a diesel option.

The Japanese market Hijet continued to also be available in the "Jumbo Cab" configuration, but new was the "Deck Van" - a version of the four-door van with a very short cargo bed in the rear. This version was also sold as the Daihatsu Atrai Deck. Export market Hijets generally received Daihatsu's familiar 993 cc three-cylinder engine, while domestic versions had to make to with 550 cc due to the strict Kei rules. Following new Kei car regulations in early 1990, the Hijet was updated accordingly. As with all its brethren, it gained ten centimetres (3.9 in) in overall length and 110 cc in displacement. This was enough to give it a new chassis code, S82. This version continued in production until being replaced by the eight generation version in 1994. 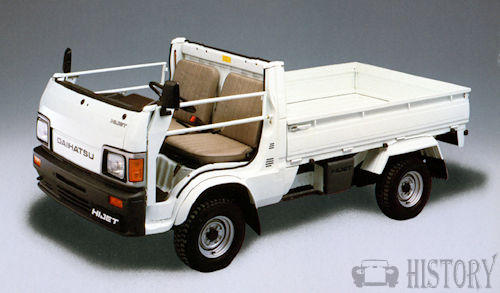 In May 1987 a supercharged version with 44 PS (32 kW) appeared in the Hijet truck. This remained available until the introduction of the larger 660 cc engine in March 1990. The supercharger's superior torque at low engine speeds made this a natural application for a truck such as the Hijet. Conversely, the Atrai passenger car version were available with a more powerful turbo engine right from the start. 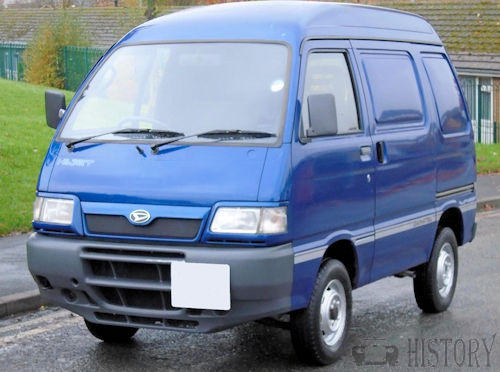 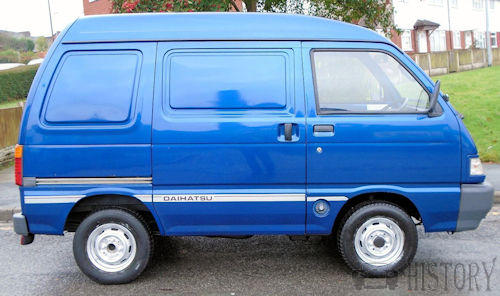 A similar divergence took place in the Suzuki Carry lineup, necessitated by new crash protection legislations enacted for passenger cars. Since the Hijet Cargo also forms the basis for the passenger use Atrai, it too now has a front-mounted engine. 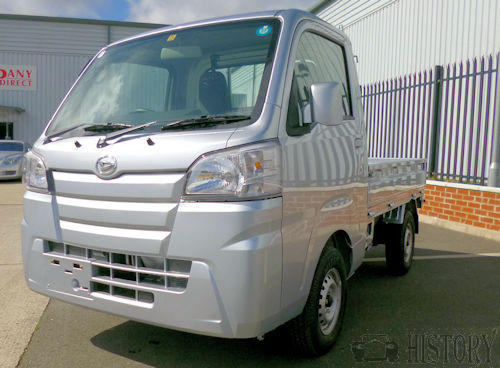 The tenth generation Van/Microbus as well as the ninth generation truck have also been marketed In Japan by Toyota in Japan since December 2011. They are called Toyota Pixis Van and Truck respecitvely. As for the Hijet, they have the new KF engine of 660 cc. 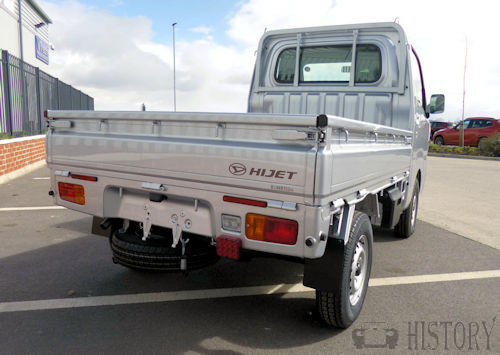 There are also versions of the Hijet sold outside Japan, available with 1.0 and 1.3-litre engines. These are no longer considered kei cars, as they are wider and longer than allowed by these narrowly defined regulations. The Hijet Maxx/Hijet Jumbo is a pick-up truck or chassis cab which can be set up for other uses such as a moving stall. 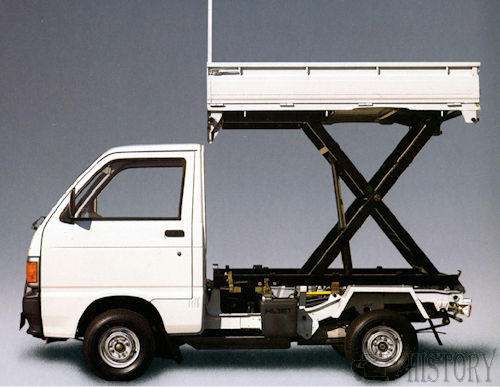 The Piaggio Porter is a licenced version manufactured in Italy since 1992 (originally as the "Innocenti Porter"), available also with diesel, LPG, CNG or electric motors. Originally equipped with a 1.0 petrol or a 1.2 litre diesel, more recent cars receive a 1,269 cc petrol/LPG engine or a 1,371 cc diesel. The 1.3 offers 65 PS (48 kW) in either configuration while the 1.4 diesel only manages 38 PS (28 kW). All of these Porter variants are based on the facelifted seventh generation of the Hijet (S82) which has its front wheel located below the front door and a mid-mounted engine.

In 2007, Daihatsu Indonesia launched the new Daihatsu Gran Max which is based on the newest Hijet ("semicab", front wheels located forward of the door). It is powered by 1,300 and 1,500 cc engines and is both wider and longer than the kei car based Hijet. It replaces the previous Daihatsu Zebra of similar size. The Gran Max is available in minivan and pick-up bodystyles and since February 2008 it is exported to Japan where it is sold as the Toyota LiteAce (S402) for pickup and also Toyota Town Ace and Toyota Modelista for minivan.

In 2002, Daihatsu debuted the Hijet Cargo Hybrid concept, a hybrid van, in Japan using a 660 cc engine. The car is based on the existing non-hybrid Hijet Cargo. Daihatsu calls it a mild hybrid design. Its design (called Daihatsu Mild Hybrid System or DMHS based on Toyota hybrid technology) is quite different from many existing hybrid design where as the gas and electric powered components assembled as one unit. The electric motor sits between the gasoline powered engine and the transmission unit. The car is 30% more fuel efficient than its gas-powered counterpart.

The hybrid minicars (called FEV - Ultra Fuel Economy - and Atrai Hybrid-IV) made its debut in 2002 as a concept minicar. Its production was announced in October 2004 but as of May 2006 had not been released.