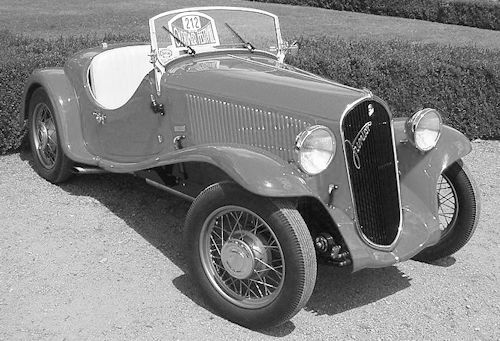 The company was founded by Josef Walter, Bohemia in 1908 to produce motorcycles and motor tricycles.

After building motor cycles and motor tricycles Waiter started car production in 1908 with a 3-wheeler using V-twin engines 500cc capacity, which was
increased gradually to 1250cc in later models. The engine was placed behind to the rear axle. The first the single front wheel and transmission versions were open two-seaters; later closed four-seater bodies were also available, In 1912 the first 4-wheeled car was introduced:  with a 4-cylinder 14hp engine. This was followed by the and WII with increased engine capacity and output.
After World War I the WZ rnodel with a 1540cc engine was brought out, followed by the WIZ.

1929 Walter super 6B 3.3 liter
From 1928 the Walter range was based on a 4-bearing ohv six on British lines with cruciform-braced frame, magraeto ignition, and hydraulic servo brakes.
Capacity, originally 2.860cc, was increased to 3.3 litres in 1930, and sports versions had 95bhp, or 115bhp with the optional Cozette supercharger. Later models used a 4-speed synchromesh gearbox with Maybach overdrive.
Between 1931 and 1933 the company also built a dozen Royals, vast prestige cars on Maybach lines with 5.9-litre ohv V-12 engines, twin carburettors, coil
ignition, and Maybach's complex B-speed Doppelschnellgang gearbox.

1934 Walter regent cabriolet 3.2 litres
Walter production was never large, and most of it was made up of licence Produced Fiats, many with local styling modifications. These comprised 1438cc
995cc touring and sports 508s, and 2,516cc 521s in short- and long-chassis forms, these last being sold as Walter Lords. After 1936 the company concen-  aero-engines.

Walter aircraft engines were used by the Air Forces of thirteen countries before World War II.

During World War II Walter produced Argus engines under license for Germany. Production of the BMW 003 turbojet was put into preparation, but none were produced.

The Walter plant survived the war intact and in 1946 the company was nationalized as Motorlet n.p. They produced Soviet-licensed piston engines, and in 1952 production of the Walter M-05 jet engine began—this was the Soviet Klimov VK-1 engine, based on the Rolls-Royce Nene, which powered the MiG-15, and was exported to many countries. The company produced a series of Soviet-designed engines during the 1950s and 1960s, though piston engine production was closed and handed over to Avia in 1964.

In 1995, the company was privatised as Walter a.s., and in 2005 the aviation engine division became Walter Aircraft Engines. In July 2006, it was acquired by the Czech investment firm, FF Invest. In March 2007, it was announced that Walter Aircraft Engines would merge with Avia's aero-engine division. The company was also merged with the precision casting company PCS.

In September 2007, it was announced that the Company's assets (which do not include its current facility in Prague) would be purchased by GE Aviation. The transaction was completed in July, 2008. GE's interest in Walter has to do with the former's desire to compete more aggressively with Pratt and Whitney in the small turboprop market; Pratt Whitney holds a commanding market share there. Walters builds the M601 engine, which GE hopes to refine and position against Pratt and Whitney's PT6. Walter currently builds 120 M601 engines per year; GE intends to increase production, by 2012, to 1,000 engines per year.