Velorex was a manufacturing cooperative in Solnice, Czechoslovakia. Notable products included a small three-wheeled car, produced from the 1950s until 1971, and the Type 562 sidecar. The sidecar is still manufactured in the Czech Republic by Velorexport, the successor to Velorex.

Beginning in 1936, two brothers František (1914 - 1954) and Mojmír (1924-2011) Stránský, the owners of a bicycle repair shop in the village of Parník near Česká Třebová, began the design of a small, cheap three-wheeled car, inspired by three-wheelers from Morgan Motor Company. In 1943, they built their first prototype using steel tubing wrapped by dural sheet metal and some bicycle parts (later these would be replaced by parts from motorcycles). They named the vehicle Oskar ("kára na ose," or "car on axle").

The post-war Czechoslovakian auto industry was unable to meet popular demand for vehicles, resulting in long waiting periods and quotas. Several models of small cars had been built either by amateurs or in small runs (e.g., Kreibich, TRIGA Tripolino, JAB).

In 1950, the Stránský's workshop was transferred to Velo, a small manufacturing company in Hradec Králové, later renamed to Velorex. In 1951, the machinery and six workers were moved into a new plant in Solnice. During that year, 120 Oskar 54 vehicles were produced; a year later, 180; and in 1954, eighty workers produced 40 vehicles per month. On January 21, 1954, František Stránský died when a test prototype crashed. His brother, Mojmír, refused membership in the Communist Party of Czechoslovakia and was fired. In 1956, the vehicle's name was changed to Velorex - Oskar and then just to Velorex. In 1959 the company produced 120 vehicles per month. In 1961 part of the production moved into a new plant in Rychnov nad Kněžnou. The maximum speed of the car was 30 km/h.

In 1963, production of the newly designed "Model 16" started (fitted with either ČZ 175 or Jawa 350 type 572 engines); and the model was modernized again in 1968. In 1971, production of three-wheeled cars stopped, and the company switched to production of a four-wheeler, the "Model 435-0", which featured the Jawa 350 type 572 - 04 engine. Problems in design and manufacturing, as well as the inability to compete with higher-category cars (including the cheap Trabants), made the four-wheeler a commercial failure, and its production was stopped in 1973. Plans to produce a small car similar to Fiat 500 or a rickshaw-like truck  did not materialize.

Spare parts for Velorex vehicles were first produced in the Solnice plant, and then in Rychnov nad Kněžnou after 1975. In the mid-1980s, India tried to obtain a license to produce the three-wheelers; the deal failed because the original tooling no longer existed.

About half of the production was exported to Eastern Bloc countries (Hungary, Poland, Bulgaria, East Germany) - 7,540 vehicles in total. In Czechoslovakia, the demand exceeded the supply and the new cars were sold only to the disabled after thorough examination by an official commission. Part of the production was allocated to companies and organizations.

As of 1996, 62.5% of the three-wheelers sold in Czechoslovakia were still registered. As of 2006 the vehicle can be still seen occasionally and it has obtained cult-like status among its owners. Several Velorex clubs exist in the Czech Republic. Rallies are regularly organized in Boskovice (last in 2007) and in Lipnice nad Sázavou, inside the Lipnice Castle. Until 2000 only the motorcycle driving license (A) was required, afterwards the B1 license (car from age of 17). 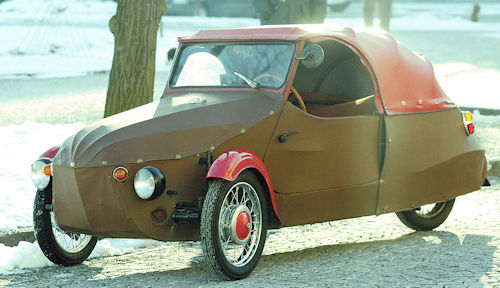 Velorex was built on a frame of welded steel tubing, with bodywork consisting of vinyl (called "Igelit") stretched over the cage and attached by turnbutton fasteners. Like most of other three-wheeler types Velorex had two wheels in the front and one wheel at the back. 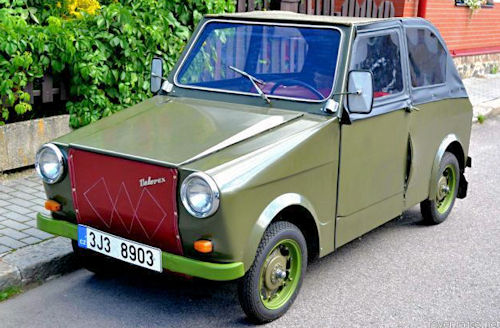 Motoscoot, a motorcycle reseller from the Czech Republic, plans to produce modern three-wheeled sport car named "Velor-X-Trike" (initially "New Velorex"). The design was made public in March 2010 and the company expects to assemble about 5 - 10 vehicles per year.

The Velor-X-Trike model has nothing to do with the recent designs by Mojmír Stránský, author of the original Velorex.