The Citroën Visa is a supermini that was produced by the French car marque Citroën from 1978 to 1988.

From 1965 Robert Opron worked on the Citroën G-mini prototype and projet EN101, a replacement for the 2CV, using the flat twin engine from the 2CV. It was supposed to launch in 1970. The advanced space efficient designs with very compact exterior dimensions and an aerodynamic drag co-efficient Cd of 0.32, were axed because of adverse feedback from potential clients.

The Citroën Prototype Y to replace the 2CV based Citroën Ami that dated back to 1960 in the early seventies, was originally developed in co-operation with Fiat, built on the lessons from the Citroën G-mini and EN101 projects. It used the then new and advanced Fiat 127 platform, that used a transverse front wheel drive engine, with an end on gearbox layout that Fiat had pioneered in the 1960s. When cooperation with Fiat ended, a new Citroën designed platform was planned. After the takeover of Citroën by Peugeot in the wake of the 1974 oil crisis, the renamed "Projet VD (Voiture Diminuée)" became the Citroën Visa, incorporating the floor pan of the Peugeot 104, to use the advanced 104 engine, with transmission (under the engine) and chassis. It was the first new model under the platform-sharing policy of PSA Peugeot Citroën that continues today. The earlier Citroën LN was just a facelift of the Peugeot 104Z "Shortcut" with a re-engine and transmission from the Citroën Dyane. Eventually, in 1984, the original Citroën platform design from "Project Y" emerged as an Oltcit in Rumania, using a Citroën Visa flat-twin engine and Citroën GS based gearbox, and Citroën GS flat-four engine and gearbox, and was also sold in Western Europe as the flat-four only Citroën Axel to recoup money that Citroën had invested in Rumania, that the communist government couldn't repay. This project was problematic for Citroën due to build quality issues, only 60,184 cars were made, even though the base models were priced below the 2CV in Western Europe. The Axel was never sold in the UK. The five-door Citroën Visa and the three-door Axel look very similar, but there is no part interchangeable between these two Citroën models.

The Visa was launched as a supermini competitor for the likes of the Chrysler Sunbeam, Mk1 Renault 5, Mk1 Ford Fiesta, Vauxhall Chevette, Mk1 VW Polo and Fiat 127. Though it was launched as a supermini, it was about the same length (3725mm)and height (1430mm), (but slightly narrower at 1526mm) as a Volkswagen Golf Mk1, which was in the next class up. It was part of a 'between sizes' policy that Citroën also followed with the BX.

From its launch in September 1978 the front-wheel drive Visa was available in "Spécial" and "Club" models (652 cc, 2-cylinder), and a "Super E" model (the 11RE after 1984), with the advanced Peugeot 1,124  cc Douvrin engine / PSA X engine, a four-cylinder "Suitcase engine" — all aluminium alloy, chain driven overhead cam, with gearbox in the sump, sharing engine oil, mounted almost on its side. The 1124 cc was as economical as the Citroën 2CV-derived twin, but with much better performance. Later on it had 1,219 cc (Super X) and then 954 cc (10E after 1984) and 1,360 cc (1983 Visa GT and 14TRS after 1985) versions of the same engine. The ergonomic design of the Visa controls used a Citroën "PRN Satellite" (P=Pluie - Rain, R=Route - Road, N=Nuit - Night) which gave access on one cylindrical unit to wipers, washers, horn, indicators, headlamps and flashers, all mounted a finger's reach away from the steering wheel. The heat and ventilation control sliders that moved in arcs, were on the other side of the steering wheel, also within closer reach than usual. In 1982 the Visa underwent a major external restyling, designed by Heuliez, to look more mainstream. It kept the original interior and "PRN Satellite" controls until 1985 when, along with the Citroën BX, it was updated with a new bulkier dashboard, instruments and switchgear that made the car feel smaller inside. Stalk switchgear like contemporary Peugeots added self-cancelling indicators, but it kept the original monospoke steering wheel. It had very soft, but well damped, long travel, fully independent suspension (Coil-sprung MacPherson struts at the front, with coil sprung trailing arms at the rear) that caused it to have a soft ride like the Citroën 2CV, but without such extreme roll angles.

CAR magazine made the Visa diesel one of its top ten models on the market for two years running in the mid-1980s (January 1986 and 1987), for its versatility (higher models in the range had split rear seats which could be lifted-out to give an almost van-like luggage capacity); ride comfort ("like a limousine"); its ability to maintain high average speeds due to high levels of grip; and value for money. It was also particularly aerodynamically stable at high speeds for a relatively light, narrow and tall car. It would remain unperturbed by cross-winds and truck bow waves at motorway speeds. It also had at the middle 'R' trim level and above, (currently unfashionable), but practical, grey plastic side rubbing strips, to protect against car park damage. The very curved sides of the windscreen, enabled the use of a very large single wiper on the long narrow windscreen, without fouling the windscreen seal. The front of the revised car, was designed to aerodynamically reduce the deposition of dirt on the headlights, and to reduce the risk of stone chips to the headlights, bonnet and windscreen. The heating and ventilation system, (even though it used only a water control valve for temperature control and not air mixing), could provide cold air from fascia side vents, to the face while warming the car. The central directable fascia vents could be heated and angled, so that they could be pointed directly at the windscreen in front of the driver, to keep it clear in extreme misting conditions. There was also an additional mid level vent, to blow air between the front seats to the back of the car.The rear parcel shelf was in two hinged sections, one in the car, the other on the tailgate, to allow objects that were slightly too tall to still fit without removing the shelf. When carrying larger loads, the part of the shelf attached to the tailgate could be folded up, and fixed with the elasticated support strings, to protect the rear window and heated rear screen elements. Long time CAR magazine columnist, the late George Bishop, actually bought one with his own money. Before the advent of the diesel model, the electronic ignition, 1124cc high compression engined Super E, (later renamed 11RE) with high gearing, was the best seller in the range. It was better equipped than the base 1L Austin Metro and 1L Ford Fiesta it was priced against, having height adjustable halogen headlights, intermittent rear wash-wipe and multi-speed / intermittent front wipers, heated rear window, removable split folding rear seats, as well as five doors when its main competitors in the UK only had three, (the five-door Metro was launched in 1985, the five-door mark three Fiesta launched in 1989). A five speed gearbox was optional, when the base model competitors could only be had with a four speed. Most 1980s base model hatchback economy cars did without halogen headlights and rear wash-wipes, even heated rear windows could be optional. The 1984 launched 954cc 10E model was a direct competitor on specification to the Metro and Fiesta, but significantly undercut them on price.

A four-door convertible version (a cabrio coach actually, with the doors and window frames remaining intact) of the 11RE was also produced in the Heuliez factory from 1984. This was heavier and slower than the hatchback that it was based on. 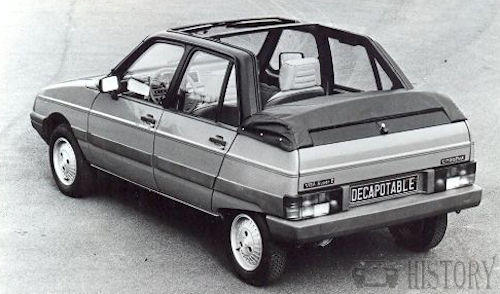 In spring 1984 the very successful diesel version was added. The Visa 17D and 17RD used the famously rugged and refined, class-leading 1,769 cc XUD diesel and transmission from the Peugeot 205. It also capably powered the Peugeot 405, which was two classes larger, and made light work of powering the lightweight Visa. It had too wide a track for the original engine compartment and wings, so the front wings were extended with large black plastic wheel arch panels. The spare wheel that in smaller petrol engine versions, was mounted on top of the flat or near horizontal engine, was bolted to the otherwise flat boot floor — compromising luggage space. In continental Europe, a basic diesel van the 'Visa Enterprise' was sold that used the normal Visa bodyshell with the rear doors welded shut It mounted a spacesaver spare wheel under the bonnet, over the diesel engine. Some diesel hatchbacks there, also used this arrangement.

At the Paris Salon 1984, for model year 1985, the 1.4 L TRS was presented. The Visa 14 TRS, was produced for two years (1985–1987), shared its engine with the Citroën BX14. Even though it received a favourable review by CAR magazine who felt it was a better performance/economy compromise than the 11RE, it wasn't very successful, due to being squeezed by the Visa Diesel and the extremely competitively priced BX 14.

Between 1985 and 1987 the 1.1 litre petrol and 1.7 litre diesel "Leader" special editions were marketed. In the latter half of the eighties a 55 PS (40 kW) catalyzed version of the 1,360 cc engine was added for markets with stricter emissions standards 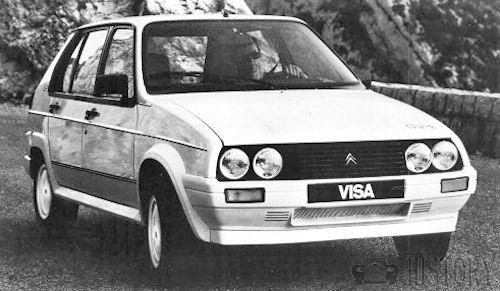 The first sporting versions of the Visa included the "Visa GT" (1.4 L with double-barrel carburettor and 80 hp (59 kW) DIN), the "Visa Chrono" (93 hp (68 kW) from the 1.4 L engine, this time with two double-barrel carbs). The Visa "Mille Pistes" (112 hp (82 kW) and four-wheel drive) was the rare production version of Citroen's successful (if unlikely looking) Visa rally car, the Visa Chrono and Chrono II.

At the Paris Salon 1984, for model year 1985, the high-performance 1.6 GTi was presented. The GTi used the 1.6 L fuel injected XU5J engine and transmission combination (105 or 115 hp (77 or 85 kW) versions) from the successful Pininfarina styled Peugeot 205 GTI. Citroën gave the GTi plastic wheel arch extensions and quad round headlights, to differentiate the model and try to make it look more sporty. It received good reviews about its ride, performance and roadholding, but due to its older, failed facelift looks and its five-doors, even with a much lower price than the chic 205 it was not a big seller. 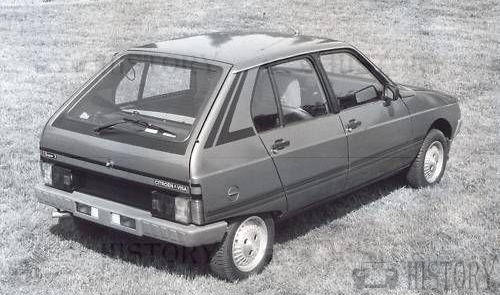 The Visa lacked the Peugeot's three-door hatchback option, being available only as a five-door hatchback. A light van using the front of the Visa, along with a conventionally sprung version of the Citroën BX rear suspension, was also produced - the Citroën C15. It was a box van, as pioneered by Citroën with the Citroën 2CV Fourgonette/AK vans and the Citroën Dyane based Acadiane van. 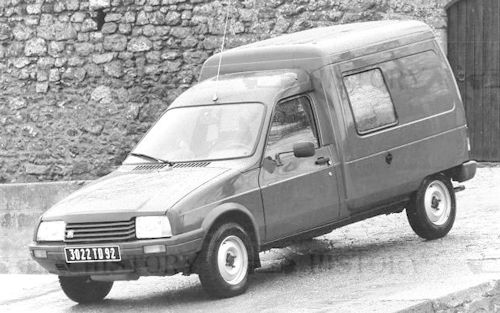