Louis Chevrolet, who successfully raced in Buick cars, decided to establish a company to make cars of his own design. So in 1911 the Chevrolet Motor Co. was founded in Detroit, Michigan. A year later the company produced its first car.

Louis Chevrolet did not stay long with his company. In 1917 he sold it to William Crapo Durand, founder of General Motors, and Chevrolet

joined Buick, Oldsmobile, Cadillac, and Oakland in G M. In 1922 William Knudsen, a Dane by birth, was appointed director of the Chevrolet works. Knudsen, a former director at Henry Ford's, introduced an efficient assembly-line. Under his guidance, Chevrolet soon started producing cars which cost the same as those made by Ford, but were even better and bigger. This probably led to the curtailment of production of Ford's successful Model T, and Chevrolet became the leader in American car production.

The Chevrolet Capitol The vehicle was introduced in January 1927 ,was among the successful types of this period. The car had a 2760 cc four-cylinder in-line engine, air-cooled and OHV, which developed 19.1kW (26hp) at 1800 rpm.

The drive was transmitted via a three-speed gearbox to the rear wheels. The oblong frame had rigid axles supported on longitudinal leaf springs. The Capitol was not fitted with brakes on the front wheels since in the company's opinion they were unnecessary for a car weighing only 910kg (20001b). With a two-door bodywork, the Capitol had a top speed of 80km/h (50mph).

Later The firm introduced front-wheel brakes in the newer 1928 models, because the rapidly increasing traffic in American cities demanded four-wheel braking. By this time over half million had been sold. 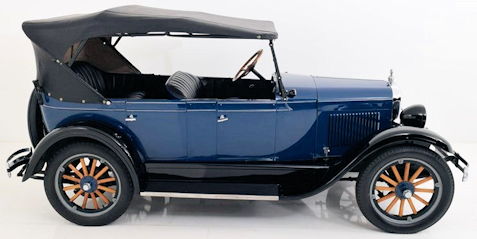