The sixth generation of the Camaro was presented to the public on 26 May 2015 at Belle Isle in Detroit . The Camaro is a sports car of the US car manufacturer Chevrolet , which belongs to the General Motors  Group (GM).

The sale of the coupe began in late 2015 in the US with the models Camaro LT and SS and three engine variants at prices starting at 25,700 US dollars . A convertible version followed at the beginning of 2016. On the New York International Auto Show 2016, the ZL1 was presented. For fiftieth anniversary of Hot Wheels a Chevrolet 2018 special edition Hot Wheels Edition made.In April 2018 was Faceliftmodell presented,  to see the first time were so vehicles on the SEMA Show 2018.

According to the manufacturer, it is a complete redesign. The production site is now the Lansing Grand River Assembly in Lansing .

The new base engine of the LT is a two-liter four-cylinder turbocharged engine (engine code: LTG) with 202 kW (275 hp) maximum power and a maximum torque of 400 Nm, which was introduced in 2013 in the Opel Insignia A (ECOTEC Gen III). Also a 3.6-liter V6 engine is available again. The V6 engine (engine code: LGX) is a new development with a maximum power of 246 kW (334 hp) and a maximum torque of 385 Nm; the engine has an automatic cylinder deactivation. The SS is only available with the 6.2-liter V8 engine, a maximum output of 333 kW (453 hp) and a maximum torque of 617 Nm. Each of these engines can be equipped with a six-speed manual or an eight- speed automatic transmissionIn Europe, however, only the 2.0-liter turbo engine (with automatic transmission only) and the V8 model are available.  The V8 engine of the Camaro ZL1 to the motor code LT4 is a stage of the V8 engine with the motor code LT1, its maximum output is 485 kW (659 hp) and its maximum torque 881 Nm is already known from the Corvette Z06.

The Camaro is rebuilt on the Alpha platform , which it shares with the Cadillac models ATS and the end of 2013 renewed CTS . It is a bit shorter than its predecessor and, depending on the model, over 90 kg lighter. The structural rigidity was increased by 28 percent compared to its predecessor.

The vehicle was in 2016 carried out US-NCAP - Crash Test five out of five stars. 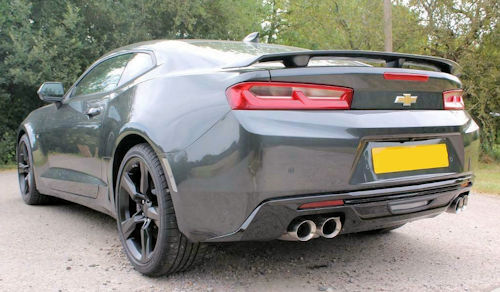