Ettore Bugatti planned to build twenty-five of these cars, sell them to royalty and to be the most luxurious car ever. But even European royalty was not buying such things during the Great Depression, and Bugatti was able to sell only three of the six made.

Crafted by Ettore Bugatti, the Type 41 is said to have come about because he took exception to the comments of an English lady who compared his cars unfavourably with those of Rolls-Royce.

The prototype had a near 15-litre capacity engine. The production version, its stroke reduced from 150 mm (5.9 in) to 130 mm (5.1 in) had a displacement of 12.7 litres. The engine was built around a single huge block, and at (apx. 4.5 ft (1.4 m) long x 3.5 ft (1.1 m) high), is one of the largest automobile engines ever made, producing 205 to 223 kW (275 to 300 hp). Its eight cylinders, bored to 125 mm (4.9 in) and with a stroke length of 130 mm (5.1 in), each displaced more than the entire engine of the contemporary Type 40 touring car. It had 3 valves per cylinder (two inlet:one exhaust) driven by a centrally positioned single overhead camshaft. Three bearings and only a single custom carburettor was needed. The engine was based on an aero-engine design that had been designed for the French Air Ministry, but never produced in that configuration.

The chassis was understandably substantial, with a conventional semi-elliptic leaf spring suspension arrangement at the front. At the rear the forward-facing Bugatti quarter-elliptics were supplemented by a second set facing to the rear.

Strangely, for the modern day observer, the aluminium clutch box was attached to the chassis, not to the engine, and the gear box, also in aluminium was attached to the rear axle, so was part of the unsprung mass of the suspension. The reason placing clutch and gearbox at such odd locations was reducing noise, so increasing comfort inside the cars, a difficult problem in those days. On the other hand, in view of the Royale's huge mass, placing the gearbox on the rear axle did not present a driveability problem.

Reflecting some tradition-based fashions of the time, the driver was confronted by a series of knobs of whalebone, while the steering wheel was covered with walnut.

A road test performed in 1926 by W.F. Bradley at the request of Ettore Bugatti for the Autocar magazine proved how exquisite chassis construction allowed very good and balanced handling at speed, similar to smaller Bugatti sports cars, despite the car's weight and size.

All Royales were individually bodied. The radiator cap was a posed elephant, a sculpture by Ettore's brother Rembrandt Bugatti.

In 1928 Ettore Bugatti asserted that "this year King Alfonso of Spain will receive his Royale", but the Spanish king was deposed without taking delivery of a Royale, and the first of the cars to find a customer was not delivered until 1932. The Royale with a basic chassis price of $30,000, was launched just as the world economy began to sour into the 1930s Great Depression. Six Royales were built between 1929 and 1933, with just three sold to external customers. Intended for royalty, none was eventually sold to any royals, and Bugatti even refused to sell one to King Zog of Albania, claiming that "the man's table manners are beyond belief!"

All six production Royales still exist (the prototype was destroyed in an accident in 1931), and each has a different body, some having been rebodied several times.

The 1930s Bugatti Royale side view 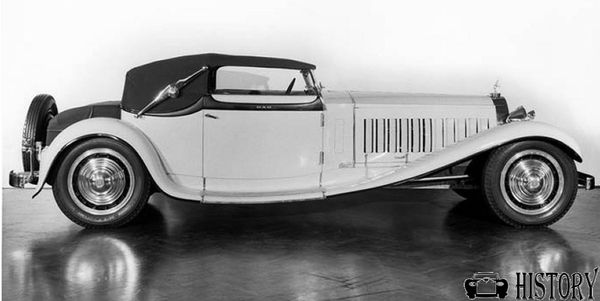