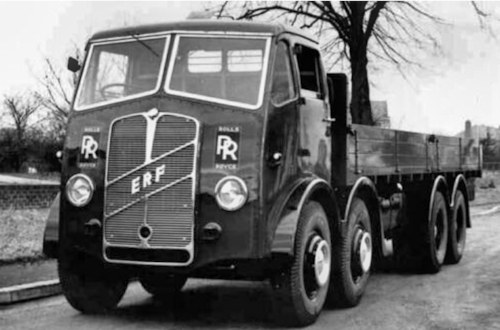 ERF was a British truck manufacturer first established in 1933 by Edwin Richard Foden, from whose initials E.R.F. come from
the company closed in 2002, and it was discontinued as the ERF name by MAN later in 2007.

The first E.R.F., the model CI 4, debuted in 1933, and was followed by the model CI 5, which included a Gardner 4LW diesel engine and hydraulic vacuum servo brakes. During the years 1933 and 1934, these two chassis were developed as platform and tipper vehicles.
In 1935, six- and eight-wheeled chassis were launched, with Gardner 4LW, 5LW, and 6LW engines. In 1937, ERF launched the world's first twin-steered, six-wheeled vehicle, and in 1938, all versions received a streamlined cab. The annual production pace had risen to 480 automobiles.

war years
During the war years a slightly modified version of the CI 4 was in production for the Ministry of Supply and in 1942 the A.E.C. 7.7 litre engine was offered as an alternative to the Gardner. 1943 saw the production of the first E.R.F. tractor units built for the Forestry Commission.

A Lockheed continuous flow braking system was introduced in 1948 together with the V-type driving cab. Full hydraulic, air-assisted braking was made
available in 1954 and the KV type cab appeared. Rolls Royce engines were first used during this year, in the model 66R tractor.
Powered steering was introduced in 1958 and in 1960 Perkins engines were used for the first time. The 88R with a Rolls Royce petrol engine appeared in 1962 and the American Cummins diesels were first used during this year.
ERF was also marketed under the Western Star badge in some countries that later brought the company by the mid-1990s by 2000, ERF became part of the MAN group. 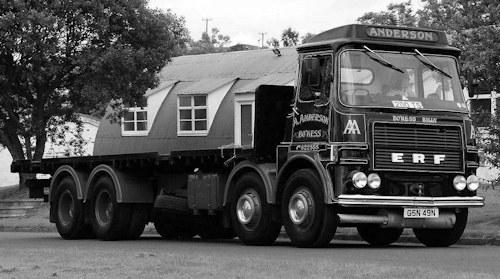