Automotive manufacturer of Northampton.Great Britain from 1911 to 1915. 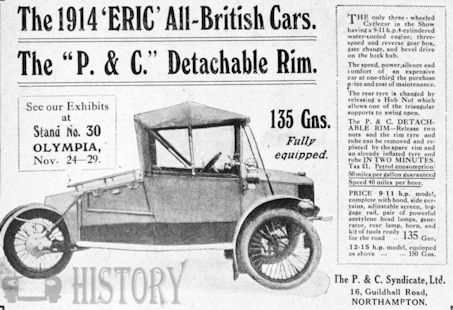 P. & C. Syndicate Ltd. was a British manufacturer of small automobiles in the 1910s.

The company from Northampton began in 1911 with the production of automobiles. The presentation of the first model took place at the 1911 London Motor Cycle Show . The brand name was Eric . By 1914 ended production.

The first model was one of the first British cycle cars .  It was  like all other models - a 3 wheel car. A water-cooled two-cylinder boxer engine with 6 HP output drove over a chain the rear single wheel. The transmission had three gears. From November 1912 the vehicle had cardan drive . The price was then 135 pounds .

In November 1912, the presentation of a cheaper model took place at the Olympia Show . An air-cooled single-cylinder engine propelled the vehicle. The price was 105 pounds.

1914 was followed by a model that was more like a real car, although it was still a tricycle. A four-cylinder engine of Salmons 8 hp drive to the vehicle. Now a coupe was available.