Automotive kit car manufacturer of United Kingdom From 1979 on. 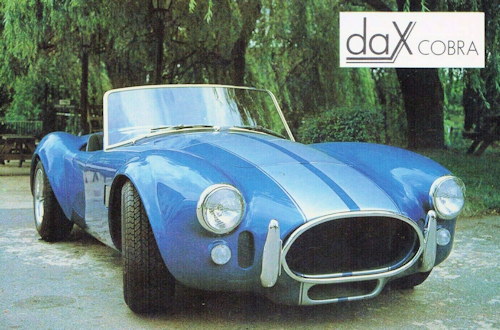 Dax is a British car brand that has been marketed since 1979 with kit type sports cars.

There were different manufacturers one after the other. DJ Sportscars International Limited. D. J. SPORTSCARS was formed in 1968 with the sole purpose of reproducing the obsolete and hard-to-get panels for the traditional British Sports Cars from Enfield in Middlesex, They started to make the kits from December 23, 1977 to May 31, 2016. Dax Sports Cars Limited from Sidcup in Kent existed from March 6, 2014 to May 4, 2019.  427 motor Co Ltd from Upminster in Essex existed of 10 April 2015 to 12 September 2019.  Current manufacturer JK Sports Cars Ltd from North Weald in Epping , founded on July 28, 2017.

The first company started producing GRP parts in 1979 and was then the first British manufacturer to produce a kit car in the style of the AC Cobra . Between 1984 and 1986 Dax continued the production of Embeesea Kit Cars . The Embeesea Charger and Embeesea Charger 2 models were on offer .

In 1985 John Tojeiro , the designer of the AC-Ace landing gear, became the company's director and the car was renamed Dax Tojeiro . The Tojeiro continued to evolve and in 2008 it was available with various rear suspensions  Jaguar front axle components with Jaguar rear axle complete
MGB front crossmember complete with Jaguar rear axle for the budget builder Ford Cortina front and rear axle complete.and most US V8 engines, as well as all Jaguar engines including the V12.

It is available with a mechanical or automatic transmission and also with power steering. Leather upholstery can also be selected on request.The Dax Cobra is a faithful reproduction of the Carroll Shelby Classic 60's performance car - the A.C. 427 Cobra. Every effort has been made to totally recreate the effect of the Cobra and also to
incorporate modern technology in its design, with the use of readily available parts which will bring the finished product to original standard and attained at an affordable price. The body shell is complete in all aspects to include all internal panels, also double skinned bonnet,boot and doors. The thickness of material used in the rust free GRP body shell is increased onmounting points and all stress bearing areas to produce a very robust and rigid unit.A coloured gel finish to customers specs.

The company also makes the Rush, a car modeled on the Lotus Seven . The kit car is based on the Ford Sierra and even the four-wheel drive of the Sierra 4x4 can be used. There are large V8 engines for extreme performance requirements. The Rush MC is a lightened version for the use of motorcycle engines, e.g. B. Hayabusa (+ Turbo).

A futuristic car built from the 1990s to 2000s using Ford Sierra and escort parts with a triangulated spaceframe chassis with a one-piece GRP bonded body.

The Californian came out in 1985, looked similar to the Porsche 356 and was based on components from the VW Beetle .

The Nevada was an off-road vehicle with tubular frame spaceframe and VW Beetle engine that was available from 1985.