Automotive manufacturer of United Kingdom from 1968 on 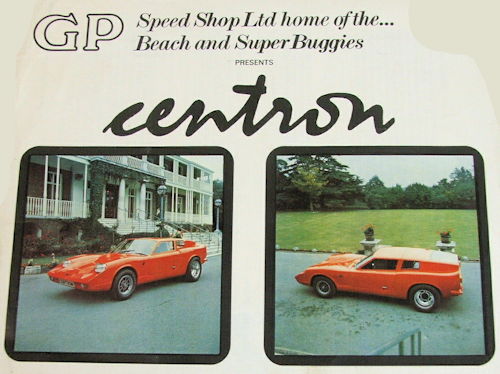 GP is a British kit car brand built from 1968 on .The brand name was as many variations over the years GP stands for Grand Prix.

First as GP Speedshop in Brentford in 1966 . John Jobber, who previously worked for Jaguar Cars and Brabham , the South African Pierre du Plessis, who worked at Lola Cars , and Peter Allnutt founded.GP stood for Grand Prix. First of all, they prepared vehicles like the Ford GT 40 and Lola T 70 for races, e.g. B. Denis Hulme , Frank Gardner and Paul Hawkins . By 1967 du Plessis became aware of the  popular VW buggies at the time .

In 1968 the production of automobiles and kits began. At that time, around 100 kits were made every month . In September 1968 the company moved to Hanworth . Many of their dealers received the molds for trial purposes. Some dealers also started their own careers as buggy manufacturers.

By 1972 vehicles were exhibited at the Geneva Motor Show , But a fire destroyed the factory in 1972, so the company moved to Islington . In the same year was moved again within Islington. There were takeovers in 1972 and 1974, while Jobber continued to serve as a director. During this time du Plessis left, who returned to his homeland. In 1975 Jobber took over the company again and renamed it GP Concessionaires. Neville Trickett joined the company around 1980. In 1982 the name was changed to GP Specialist Vehicles . Together with a move to Princes Risborough in 1993, the company was renamed GP Developments and in 1994 GP Projects . From 2002 to 2004 the company resided as GP Technical in Helston .Exports have so far been made to France , Switzerland , Spain , Germany , the Middle East , the West Indies , Singapore , Greece , Austria , the USA , Australia and South Africa .