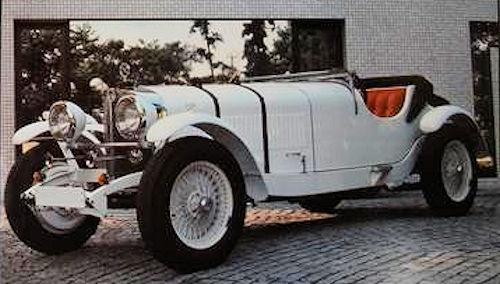 Church Green Engineering Limited was a British company in the field of automotive and a former car manufacturer. The brand name was Gozzy .

The company was founded in 1977 in East Knoyle in the county of Wiltshire as a restoration company. After the restoration of a Mercedes-Benz SSK for a Japanese client, a demand for replicas of the vehicle arose .

Len Terry was involved in the construction.Between 1978 and 1983, the company manufactured automobiles. In total, six copies were created. John Richard Hesketh Richards, Nicholas Henry Gold, Paul Frederick Edward Weldon and Peter John Scott were from 1991 directors, Financial difficulties arose in 1995 and by 1997 the company was dissolved.

The chassis received the wheel suspensions from the Leyland Sherpa van . A six-cylinder 2800 cc engine from Daimler-Benz powered the vehicle. The body was made of aluminum .