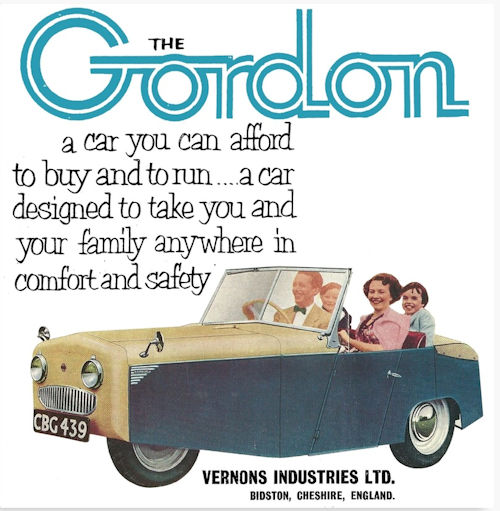 Vernon Industries Ltd. was a British manufacturer of small automobiles in the 1950s.

The company from Bidston began in 1952 with the production of automobiles. The designer was Erling Poppe, who previously worked for Sunbeam . The brand names were Vi-Car and from 1954 Gordon . 1958 ended production. In total, a few hundred copies were created.

As the Brand Name Vi-Car:Between 1952 and 1953, the company produced invalid vehicles called Vi-Car . The design was the same as the Gordon, but there was only one front headlight. The cover of the rear wheels with motorcycle-like fenders was designed simpler.

As the Brand Name Gordon: This was a microcar with three wheels, of which the single wheel was at the front. A single-cylinder engine from Villiers Ltd with 197 cc displacement was mounted to the right of the driver (right-hand drive) outside the body and powered by a chain on a rear wheel. Access to the interior was therefore only possible through a door on the left side. The body was made of steel and had a roll roof. With a new price of about £300 , it was then the cheapest car in the UK market.