Automotive manufacturer of Wigan , Greater Manchester.Great Britain from 2003 to 2008. 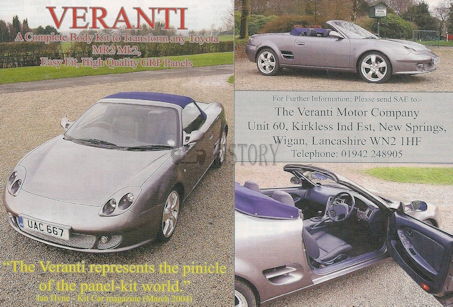 Veranti Motor Company was a British manufacturer of Panal Kits for automobiles in the 2000s .

John Barlow, who is also the Regent Motor Company launched, in 2003 founded the company in Wigan in the county of Greater Manchester . He started producing automobiles and kits . The brand name was Veranti . In 2008 the production ended. In total, about 43 copies were made.

Founded 28 March 2012 Veranti Motor Company Limited from Hallow at Worcester in Worcestershire , led by Neil Roger Sysum and Helen Louise Sysum is owned by the trademark.

The first model was the convertible . This was an open vehicle. The basis was the Toyota MR 2 . From this model created about 40 vehicles.

In 2008, the coupe completed the range. It was the closed variant and found about three buyers.