Automotive manufacturer of Corby, Northamptonshire.Great Britain from 1984 to 1994. 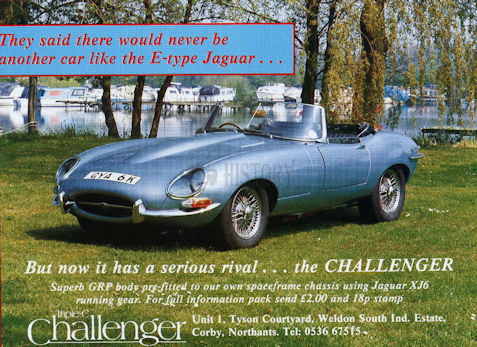 Triple C Challenger Cars was a British manufacturer of sports car replicas . The models were mainly delivered in kit form .

Founders of the company were former teacher Derek Robinson and engineer John Wilkinson. Their goal was to produce low-cost replicas of the Jaguar E-Type . The company, initially called Car Care Clinic , was based in St Austell , Cornwall and began operating in 1984. Three years later, Triple C moved to Corby , Northamptonshire , where Robinson expected better regional economic development. Finally, in 1992, it moved to larger factories in Scottish Newtown St Boswells , again with aspects of economic development as the primary role for relocation. The following year, the company was renamed Challenger Automotive Developments . Due to the price decline for used - original - Jaguar E-Type models, the demand for replicas declined significantly in the early 1990s. Attempts to offer kits for replicas of other classics failed. Challenger ran into financial difficulties, which led to Robinson and Wilkinson sold their shares in late 1993. The buyer renamed the company Reiver Motor Cars, but did not achieve any economic success. In 1994, the operation was closed as a result of bankruptcy.

The company's most successful model, the Triple C, was a Challenger replica of the Jaguar E-Type Roadster. Robinson and Wilkinson developed two series, from which they could sell approximately 250 copies from 1985 to 1993. Some vehicles have been completely assembled on customer request at Triple C.

Mark 1 The Challenger used a standalone, designed by Wikinson framework. The negative molds for the body took Wilkinson of his own, built in 1961 E-Type. The first copies of the Challenger were designed for the drive technology of Rover ; this included the 3.5-liter eight-cylinder engine. Numerous technical components were taken over by the Ford Cortina . From 1986, Triple C was granted permission to use Jaguar's technical components. The kit has been adjusted accordingly. The work was done by engineers Steve Green and Paul Crab.

Mark 2 After moving to Colby in 1987, Triple C introduced the Challenger's second series. The chassis was completely redesigned. It reduced the weight of the car compared to the Mark 1 by 133 kg. The Challenger Mark 2 was 334 kg lighter than the original E-Type. Following the bankruptcy of Reiver Motors in 1994 took over Avon Coachworks in Timsbury , the construction plans of the Mark 2, where the project lived from 1996 to 1996 on.

Lightweight In 1988 and 1989, Triple C produced two replicas of the successful in motorsport E-Type Lightweight.

In addition to the Jaguar E-Type Triple C tried to bring other replicas known sports cars in kit form on the market. With the exception of a replica of the AC 428 , this was not to own constructions of Triple C, but to kits that were developed and manufactured by US suppliers. Triple C intended to refine these kits and offer them in Europe. The plans could not be realized; Triple C built only one copy of each set. They included replicas of the Mercedes-Benz 300 SL and the Porsche 959 .

Steve Green designed the Malibu , which resembled the Mitsubishi Pajero . The technique came from Ford . Between 1991 and 1999, about four copies were produced by Car Care Clinic, Reiver Motor Car Company and Avon Coachworks.