Automotive manufacturer of the United Kingdom From 1924 to 2005. 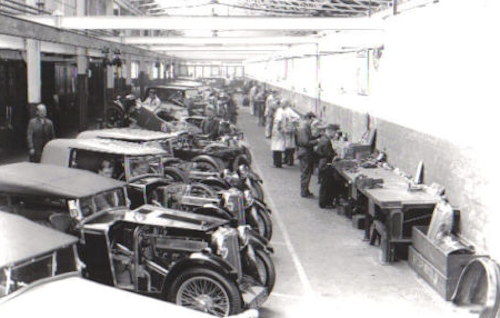 MG was a famous British car brand with a long history,owned by the MG Rover Group until 2005.

Morris Garages was created in 1923 in Oxford (England), with Cecil Kimber as the first director. He moved to Abingdon, Oxfordshire, in the late 1920s. The first model was based on the Morris Oxford sports tourer, which was sold under the designation MG 14/28 beginning in 1924. Sporty sedans followed, with the MG 14/40, introduced in 1927, being the first vehicle to bear the octagonal MG symbol.

Starting in 1928, the M-Type Midget was the first time a simple, two-seat sports car was built, which was typical of the offer of the brand. The Morris Minor- based sports car with ohm engines became the first truly successful model of the brand because it was reasonably priced and offered very good performance.

With the C-Type Midget 1931 in Montlhéry the first sports success of the brand retracted. Further developments were the models J3 / J4 with supercharged engines, which were designed specifically for racing use, and their successors Q-Type and R-Type.

Until the mid-1930s included the model range next to the small Midget the larger models Magna and Magnetite with ohm six-cylinder engines of less than 1.5 litres. Although the simple but reliable and powerful roadster was the company's main field of activity, there were always sporty coupes and sedans, all of which were derived from Morris constructions. From about 1935, the T-Type replaced the Midget with simpler designed ohv engines and the larger four- and six-cylinder models SA, VA and WA the magnet.

After the Second World War, the small sports roadster was offered again from 1945 with the TC. From 1950, joined with the Series Y again a sporty sedan - like the Roadster equipped with a 1.25-liter four-cylinder engine. Mid-1950s, the old T-type roadster (MG TF last) were replaced by a completely new, modern design, which indicated a new start as MGA. This car was also the first time increasingly exported and opened MG above all the important American market. 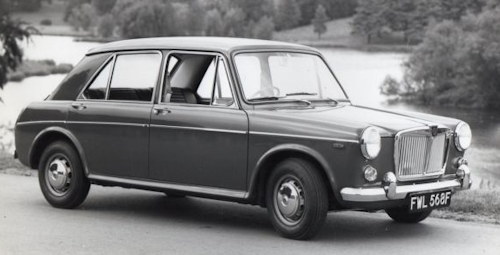 The name Magnettee merged again and referred to the mid-1960s, the large sedans that - equipped with four-cylinder engines - were just slightly more luxurious versions of the sister brands Morris and Austin, which belonged to MG since the mid-1950s to Nuffield Corporation. From 1961 there was again the smallest model of the brand a midget, which was derived from the Austin-Healey Sprite. Also, from mid-range model of the group, the Austin / Morris 1100 / 1300, there was always a better equipped MG variant.

In May 1962 replaced the MGB with self-supporting body from the successful MGA. The meanwhile grown to 1.8 l four-cylinder engine was at the end of the 1960s, a MGC with 2.9 -l six-cylinder side aside in the mid-1970s, even an MGB V8 with the acquired from Rover 3.5 -l V8 -Engine. In addition to the Roadster, the MGB was also available as a GT model with a fixed roof. Until the end of 1980 remained MGB and MGC on offer, then disappeared for a long time last independent MG-construction.

From 1981, the MG were just top versions of models of the sister company Austin, such. B. the Metro, the Maestro and the Montego. These three models are also referred to as MG-M series and were manufactured until 1990. The Nuffield Group initially operated as British Motor Corporation (BMC), following the acquisition of Leyland as British Leyland Motor Corporation (BLMC). In 1984, the last Morris was built and out of the BLMC conglomerate, which included almost all British automakers, the Austin-Rover Group and then the Rover Group emerged after several economic turmoil. 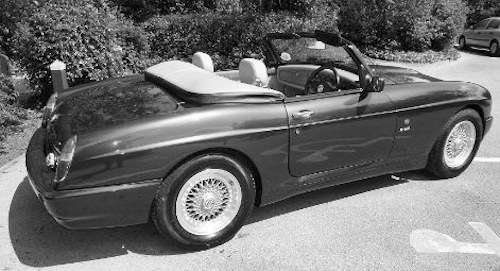 After there had been no MG vehicle for three years, put on the MG RV8 in 1993, a closely related to the 1980 disappeared MGB similar vehicle again. This was only offered in the home country in a total of 2000 copies for two years Roadster had a 4.0 -later V8 engine from Rover.

In 1994, the German car manufacturer BMW took over the Rover Group and  encouraged by the sales success of the MG RV8  in 1995 with the MG F again an independent new MG construction out. As the first MG, the F had a built-in behind the front seats mid-engine, a four-cylinder with 1.8 later displacement. 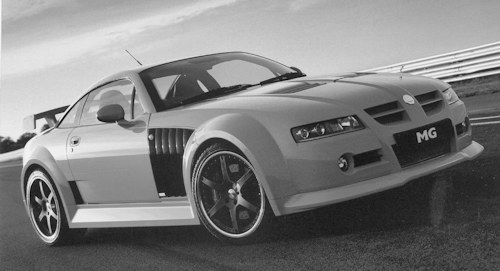 Already in 2000, BMW sold the Rover Group (including the MG brand, but excluding the Mini and Land Rover brands) to the British Phoenix Venture Group, which for marketing reasons now owns its new car division MG Rover Group due to sustained earnings weakness at its UK subsidiary called.

As of mid-2001, the sporty MG versions ZR, ZS and ZT were built in familiar fashion by the Rover models 25, 45 and 75, respectively. These models are also summarized as MG-Z series. The MG F received a revised successor model (including classic suspension instead of Hydra gas and a torsion-resistant chassis) with the traditional name MG TF of its predecessor from the 1950s. In 2001, Lola even built a racing car for the 24 Hours of Le Mans, the MG-Lola EX257. In 2003, the MG Rover Group bought the Italian small series manufacturer Qvale Automotive produced in the sequence 50 pieces of mid-engine sports car MG XPower SV.

Ultimately, the MG Rover Group was unable to hold its own in the international automotive market, as market share and capitalization were too low. In April 2005, she had to file for bankruptcy.

In July 2005, the Chinese Nanjing Automobile Group was awarded by the insolvency administrator PricewaterhouseCoopers for the purchase of the company. The Modena site was acquired by a newly formed company called MG XPower and produced the XPower WR model in a small batch production. Nanjing Automobile was taken over by SAIC Motor, who had previously taken over the Rover part but not its name.

From 2008 to 2016, the British MG Motor UK Limited was the final installer of the MG vehicles, which were delivered as almost finished kits from China. The final assembly with last 25 employees was discontinued in autumn 2016. Longbridge is also home to the SAIC Motor Technical Centre (SMTC), which designs and develops 400 models of the Chinese MG brand. Currently, the models MG 3, MG GS and MG ZS are distributed in the United Kingdom.