Automotive manufacturer of Tenbury Wells, Worcestershire: United Kingdom From 1984 to 1987. 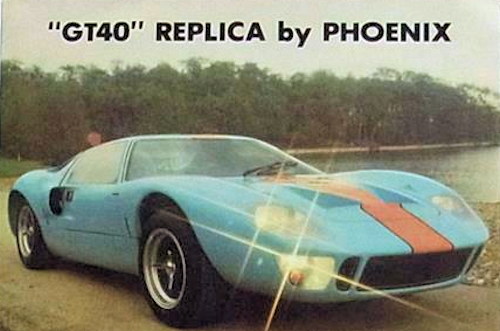 MCR Phoenix Automotive Limited was a British manufacturer of sports cars and kit automobiles from the 1980s.

The company from Tenbury Wells in County Worcestershire distributed vehicles from KVA Cars. In 1984, the production of automobiles and kits began. The brand name was MCR. 1987 ended production. In total, about seven copies were created.

The  model was the Phoenix. This was a replica of the Ford GT 40. THE "GT40" REPLICA has been designed and developed by a team Of widely experienced engineers to provide a practical and faithful reproduction of the original legendary "GT40", victorious Le Mans no less than three times. By using easily obtainable mass-produced parts for running gear the cost is kept to a realistic minimum both with regard of building and running. However even more important than cost are quality, safety, and ease of construction. All these factors have been Of primary concern to the designers at all times.

Performance obviously depends on the power unit fitted, but with good aerodynamics and low weight it ranges from fast to very exciting.
The result hos been widely acclaimed by the motoring media and knowledgeable enthusios's worldwide. All parts needed can be supplied
supplied as — BASIC KITS from £2950 PART-BUILT CARS and COMPLETE CARS.