Automotive Car manufacturer of Clayton, Manchester;United Kingdom From 1897 to 1902. 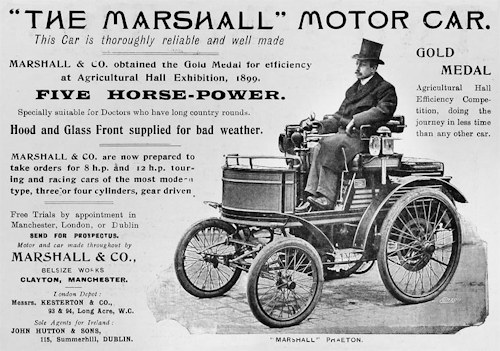 Marshall & Co was a British manufacturer of early automobiles in Clayton, Manchester England .

The firm began manufacturing automobiles in Manchester in 1897. Agencies for sales were established in London and Dublin Ireland, It was later renamed Belsize Motor & Engineering Co Limited in 1902.

In 1901, a four-seat model with a Buchet twin-cylinder engine became the first to bear the Belsize brand as the "Marshall Belsize," named after their Belsize plant where they had constructed bicycles. 2 and 4 cylinder engines also became available with 8 hp and 12 hp touring and race cars and taxis.The model 4 ½ HP was similar to the French Hurtu , which in turn resembled the German Benz . The single-cylinder engine was mounted in the rear. There was the body shape vis-à-vis.

There was no connection to Marshall, Sons & Co. from Gainsborough , which produced steam engines and tractors from 1895 , and also to PFE Marshall from Gainsborough, who produced passenger cars between 1919 and 1920 .

In 1906 the name changed to Belsize Motors Ltd.