Carmakers manufactured in Compton Verney , Warwickshire.Great Britain from 1979 to 1989. 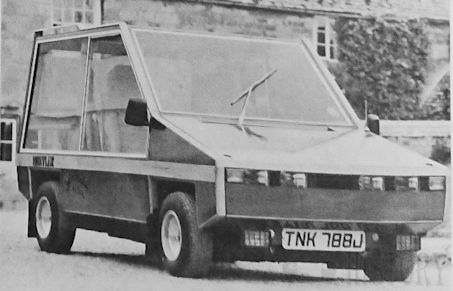 Interstyl was a British design bureau and manufacturer of kit cars and automobiles .

The designer William Towns founded the company in 1974 in Compton Verney in the county of Warwickshire . He started with the development and production of automobiles. The brand name was u. a. Interstyl . 1989 ended production. In total, over 350 copies were created.

The most successful product was a kit car , designed in 1979 and offered between 1980 and 1989 under the Hustler brand name .

The designer William Towns - who was also responsible for the Aston Martin Lagonda - designed the vehicle in 1978 and later produced the kits in his design studio Interstyl in Compton Verney in Warwickshire . It was a kit car . Basis of the vehicles was the mini .

The original version had steel frames made of square profile beams clad with fiberglass panels and large, flat windows. Most models had sliding doors. The front and rear subframes as well as the mechanics came from the Mini, Metro or BMC ADO16 . The Hustler was available with four and six wheels. In the six-wheeled version, two subframes of the Mini were used in the back. Stylistically, the vehicle had echoes of Lagonda and Bulldog .

Around 500 copies in various model versions were produced until 1989.

In 1978, the Astra was born . This was a small car . A transversely mounted four-cylinder engine from the Mini propelled the vehicle. The vehicle remained a prototype .

In 1985,  the Black Prince as a single piece. This was a replica of the Invicta Black Prince . The chassis of the Reliant Kitten formed the base. There was a connection to Invicta Cars from Plymouth .

1986 appeared the Tracer . This was an open two-seater, which remained a prototype.

From pizazz or pizzazz created between 1986 and 1987, three copies. These were attachments for the Peugeot 205 .