Automotive manufacturer of Bath, Somerset;United Kingdom From 1903 to 1929. 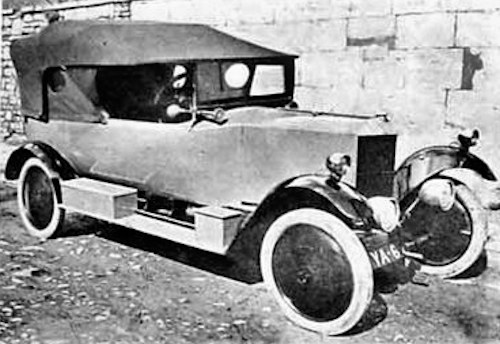 Horstmann Cars Limited , was a early British manufacturer of automobiles in Bath, Somerset .

The company was founded by Sidney Adolph Horstmann, son of a 1850 Westphalian immigrant watchmaker and inventor Gustav Horstmann . Horstmann received more than 100 patents  and in 1856 the exact micrometer invented. It is now in the Science Museum in London . His  watchmakers - and The jewelery business later traded under G. Horstmann & Sons.It went on in 1925 in the Horstman Gear Company .

Sydney Horstmann worked around 1900 with the engineer Richard John Baynton Hippisley on a three-wheeled automobile with a single-cylinder engine . He invented a continuously variable vehicle transmission and founded the following year the Horstmann Gear Company for evaluation of the patent. The company made a good name with movements , chronometers and mechanical timers .

In 1903, Sydney Horstmann exhibited a Light Car (a former vehicle class between Voiturette and small cars ) at the London Motor Show . The vehicle was built until 1912 at the Horstmann Gear Company , but only in small quantities. ]

The automobile division became an independent enterprise 1913 as Horstmann Cars Limited . It was presented to the public on the occasion of the London Motor Show this same year.  After the outbreak of the First World War , and after a very short production time, the car construction was suspended. In the course of the First World War , the Briton Horstmann changed the name of his farms from Horstmann to the English spelling Horstman .

After the war Horstman -Automobile appeared again . All had light bodies and a sporty impact. The four-cylinder engines were sourced from Anzani and Coventry Climax . They were quite successful in motorsport and were also at club races in Brooklands .

In 1922 Sidney Horstmann invented the Horstmann drive , a suspension for military tracked vehicles. There is an unexplained link to Horstman Ltd. in Bath, which produced camshafts and other precision parts for mechanical engineering . This company was acquired by Simms in 1955 and moved to Lucas Industries in 1969 . 1975  was separated and Weyburn Engineering, the remaining part became the still existing Horstman Defense Systems .