Car manufacturer of Basingstoke.Great Britain from 1970 to 1993. 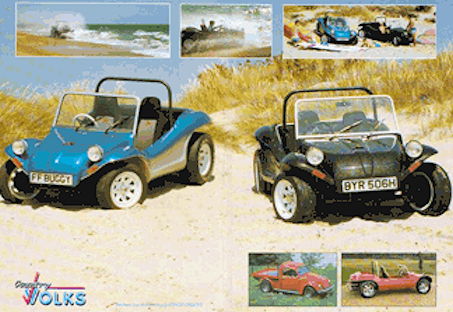 Country Volks was a British manufacturer of kit car automobiles .

The company from Basingstoke began in 1970 with the production of automobiles. From 1987, Stephen Wilson led the company, while there is no information for the time before. The brand name was initially only Country volks , from 1985 FF and from 1987 also advice , after Wilson took over the production of two models of FF Kit Cars & Conversions . In addition, from 1990 kits were imported from Apal from Belgium and offered. 1993 ended production.

Country Volks: This brand was used between 1970 and 1992. The offer included VW buggies . They resembled - like so many British buggies - GP's buggies . In total, this resulted in about 400 copies.

Rat: These vehicles produced from 1987 to 1993 were also buggies. Striking was an indicated oval air intake in the front.

FF: Between 1985 and 1993 Country volks made the FF Countryman . This was the conversion of a VW Beetle into a pickup truck .

The FF Buggy , produced from 1987 to 1993, was a further development of the Council with an ordinary front and was similar to the Country Volks .