The Morgan & Company Limited was a British automobile manufacturer . There was no connection to Morgan Motors from Malvern.
Company History

The company was founded in 1795 in London with the manufacture of carriages. in 1886 the company moved to Leighton Buzzard .To produce  bodies created for motor vehicles. 1904 began the production of automobiles. As of 1907, imported chassis of the Morgan Adlerwerke from Germany . During the First World War the company produced aircraft fuselages for the Royal Air Force . After the war, they made only motor vehicles bodies. 1929 ended production.

In 1904 , a vehicle with an electric motor , which was called Electric Motor Phaeton.In 1905 Morgan made luxury cars with four-cylinder engines from Mutel .  displacements of 5200 cc and 5800 cc. A special feature was the hydraulic Sparks Boothby coupling, was used but only for the first five cars. Thereafter, a  common leather cone clutch was used.  Production ended probably in 1907.
Bodied by Morgan & CompanyAdler K 6/14 hp from 1910 Morgan also made, Bodies  for the eagle KL 6/16 hp, . 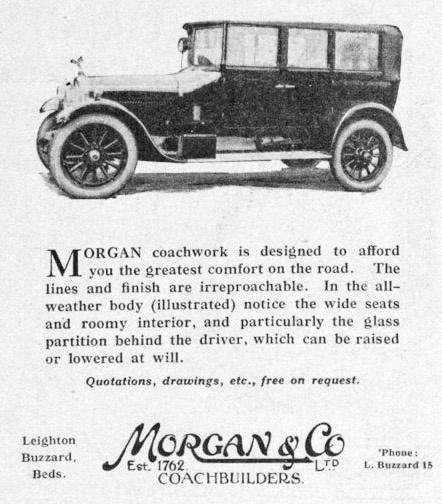