The Evante is an English automobile which began production in 1987 in Spalding, Lincolnshire, England. Engine tuning company Vegantune had been restoring Lotus Elan cars and making some improvements to them. They decided to build a complete new car and set up a separate company, Evante Cars Ltd, to make them.

The car's looks were heavily inspired by the Lotus Elan and it was powered by the Ford Kent based Vegantune VTA 1.6 and later 1.7 litre twin overhead cam engine 170 bhp with twin Dellortos carburetors driving the rear wheels through a 5 speed gearbox and diff originally from a Ford Sierra. The fibreglass body and carbon-fibre was mounted onto a space frame chassis with independent double wishbones suspension all round. Disc brakes were fitted front and rear. The car was also fitted with a Ford Zetec 1.8 Litre engine .

Fitted with Vegantune's DOC four-cylinder engine driving the rear wheels through a five-speed gearbox and a Ford Sierra differential unit, it is also quicker than the legendary Elan Sprint S4 and sports fine handling and roadholding. Its interior benefits from modern design thinking and is both spacious and unexpectedly comfortable. The car was fully built in limited quantities. 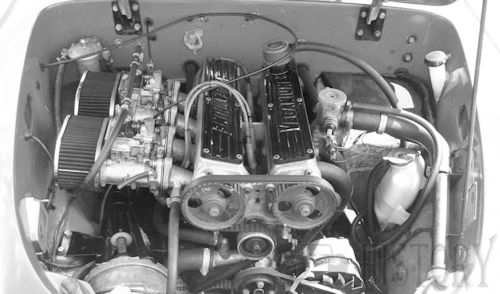 The cars were intended to be available as either complete or in kit form but all cars were supplied fully built and were produced at a rate of about one a week. The bodies were well fitted out with leather seats, walnut dashboard and electric windows. Modern twist on the original Elan using electric pop up headlights rather than vacuum headlights on the original. and VDO gauges. keeping a more accurate account.with switch gear from the mk4 Ford escort of the time.

Production stopped in 1991 when the original company failed but the design was bought by Fleur de Lys who specialised in making retro styled vans.

An attempt was made to revive the car in 2001, but this was unsuccessful.