Automotive Manufacturer of Essex and Cambridgeshire; United Kingdom from 1990 to 1996 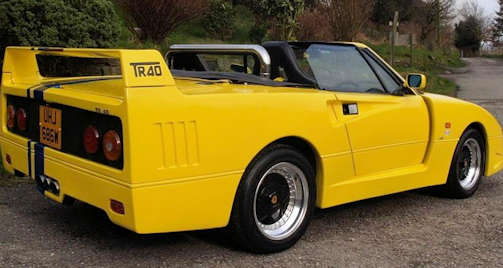 Eurosport (UK) was a British manufacturer of replica kit automobiles in the 1990s .  The brand name was Eurosport .

The company from Rayleigh in the county of Essex was initially an auto repair shop, which specialized in the Fiat X 1/9 .1990 began production of automobiles and led by JH and MP Weidner kits . In 1992, he moved to Sawston in Cambridgeshire . 1996  production ended there. Rimmer Bros from Lincoln in Lincolnshire continued production while maintaining the brand name until 1998. In total, about four copies were created.

The only model was the TR 40 . This resembled a Ferrari F 40 . The base was a Triumph TR 7 . On it a body made of fiberglass was mounted over but still with the main body of the TR7 underneath . The choice of the FHD Coupé and Cabriolet TR7 was avaliable owners often fitted the Rover V8 engine .