The E25 X1 Turbo concept car was built by BMW as a celebration for the 1972 Summer Olympics in Munich.. The then chief designer Paul Bracq drew the bodywork and the Turbo X1 was presented to the public in 1972 and was intended solely as a technology study and thus remained a prototype.

It was designed by Paul Bracq, with gullwing doors and was based on a modified 2002 chassis with a mid-mounted engine. The Turbo featured a 200 hp turbocharged version of the engine from the BMW 2002, foam filled front and rear sections to absorb impact, side impact beams, a braking distance monitor utilizing radar, and a futuristic cockpit.

The body was made of steel , while the front and rear of the first malleable bumpers in Europe were used. Due to high demand from auto shows that wanted to issue the turbo prototype, BMW made a second car. In this, the rear wheels were half disguised to achieve better aerodynamics.

These panels were rebuilt for the earlier prototype to achieve a uniform look. Another highlight a braking distance monitor utilizing radar also was the gullwing doors whose discs had a small sliding window on the second, later built prototype. Many of the ideas and details gained from the vehicle were adopted in the BMW M1 , which was produced from autumn 1978 to the end of 1981 , such as the folding headlamps and the BMW signs on the left and right.

Only two were ever built. Note from pictures rear wheel arches. BMW later used the Turbo's design themes on the M1, the 8-Series, the Z1 and the 2008 M1 Homage Concept. 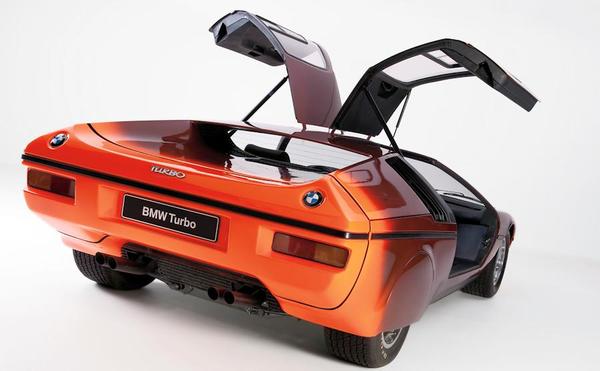