The sixth generation of the BMW 5 Series the (F10) debuted 23 November 2009 as a 2010 model.The Station Wagon/Touring version carries the chassis code F11, while the Gran Turismo hatchback style is known by F07. This chassis is shared with the 7 Series (F01) and the 6 Series (F12/F6).

It was designed by Jacek Fröhlich from November 2005 to December 2006, with a more prominent upright split kidney grille and the absence of the "Bangle butt" rear-end styling of its E60 predecessor. Externally, the car is a more traditional BMWesque design; a far more sober effort after the highly controversial E60. Although it bears some resemblance to the E60 with the wide kidney grilles and a very pronounced Hofmeister kink, the creases in the bonnet and just underneath the door are clearly related to the E39 and other earlier 5 series models. Inside marks the return of the centre console being clearly angled towards the driver, another marked change from its immediate predecessor which was noted for its non traditional BMW design. However, opinion is divided, as a reviewer described the F10 as too bland and conservative, compared to the E60 predecessor, as well too much resemblance to the E90 3-Series.The New York Times has noted that the F10 5 Series, unlike its awkward fifth-generation predecessor, "is conventionally handsome in the husky and muscular way of a German soccer fullback", albeit suggesting that it resembles the 7 and 3 Series sedans too much — the same sausage, cut to a different length.

The F10 shares a platform with the BMW 7 Series (F01) and has been described as a downsized-7 Series in contrast to its E60 predecessor which was regarded as an upsized 3 Series. Improvements over the E60-generation 5-series include a front dual ball joint short-long arm suspension, and rear multilink suspension, making it more refined but heavier. While the E60 had an aluminum front chassis structure from firewall forward (which provided perfect balance but was expensive to repair), the F10 has returned to the conventional steel monocoque.

A long wheel base version of the BMW 5 Series Sedan was developed for the Chinese and Mexican markets, as a cheaper alternative to the BMW 7 Series which is also longer and wider. The 5 Series LWB has been extended by 14 cm (5.5 in).

The model range includes the 520Li, 523Li, 528Li, and 535Li. All models include 8-speed automatic transmission with Steptronic.

Mexican built armored BMW 5 vehicles are also built on an identical stretched frame as the Chinese long wheelbase model but are otherwise identical to the international models and do include most of the specialized features of the Chinese version apart from the entertainment system and power sunblinds. Instead the added space is used for the installation of armor plate and other security features. This model is known as the BMW 5 Security and only is available in long wheelbase form with the 4.4L V8 engine. BMW is planning on selling the Chinese built long wheelbase version in the Middle East market by 2013 and eventually assembling the LWB 5 series in their Egyptian facility for the Middle Eastern market. The Mexican built armored LWB 5 series is currently sold internationally as the BMW 5 Security and is manufactured in Toluca, Mexico State, Mexico.

The vehicle was unveiled at Olympic Stadium Munich in 2009.

The vehicle was unveiled in 2010 Auto Mobil International.

In May 2009, BMW released the official pictures of its production model 5-Series Gran Turismo, which is considered a coupé-like crossover vehicle or station wagon - a blend of different typical body styles. BMW advertises the new 5-Series GT as "The First of its Kind". The 5-Series GT is powered by a single-turbo diesel straight-6 producing 245 PS (180 kW; 242 hp), by a single-turbo straight-6 producing 306 PS (225 kW; 302 hp) and a twin-turbo V8 producing 408 PS (300 kW; 402 hp); the latter will give the car a 0-60 mph time of 5.5 seconds. The car receives ZF's new 8-speed serial automatic transmission, along with a new Brake Energy Regeneration system.

BMW has suggested that the new 5-Series GT would replace the 5-Series Touring (wagon) in their North American lineup, due to slow sales of the E61 Touring in the United States, with only 400 sold in 2009. In that country, more M5s and Z8s have been sold than the 535i and 540i wagons, respectively. BMW is targeting annual sales of 4000 to 8000 5 Series GTs.

The F07 Gran Turismo shares the same F01 7 Series-derived platform, powertrain, mechanical package, and dashboard with the F10. However the F07's fascia has different headlights and bumper, with a larger split-kidney grille similar to that of the F01 7 Series. The F07 also has a taller height resulting in a higher center of gravity, its longer length allows for more rear legroom, the rear passenger accommodation has optional "Executive" bucket seats for two instead of the three-seat bench, and it weighs 400 pounds (180 kg) more than the F10. The F07 also features frame-less doors and a double-pane liftgate truck.

The F07 was released before the rest of the next-generation 5-Series lineup. In Canada and the United States, for first half of 2010, the Gran Turismo was sold alongside the outgoing E60 5-Series, until the rollout of the F10 in June 2010.

In the 2011 5 Series commercial 'Refuel' (produced by Grey West), it reemphasized The Ultimate Driving Machine as the brand's central positioning. The ad features 5 Series sedan and a jet plane. 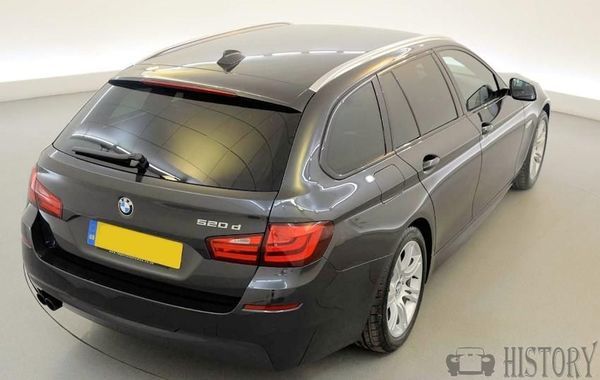